Need An SD Fix? CD With The - ResQ 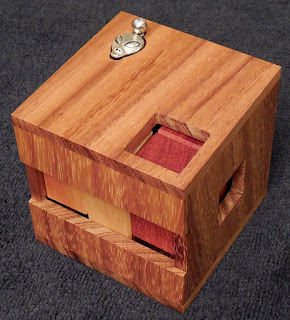 I’ve been enjoying the Sequential Discovery (SD) puzzles that have recently been released by layerbylayerpuzzles and when Cubicdissection (CD) announced that they would be releasing an SD puzzle, it caught my interest.  This puzzle, of course, is ResQ.  It is based on Visitor Q by Frederic Boucher and extended by Eric Fuller at CD with additional challenges to extend the storyline.

The puzzle arrives in a very recognizable orange box.  In this case, the box had a black bag attached to it.  This bag contained a black towel, a description of the ResQ backstory and goals, and a Reset Guide.

The towel was a nice touch.  Many SD puzzles are susceptible to having small pieces fall out and roll out of sight.  Most puzzle gatherings aren’t complete without someone swearing at pieces rolling across the floor and groups of people on their hands and knees looking under the furniture.  Oh, how I miss the look of horror on their faces.  CD decided to preempt that experience and provide an official towel to work over.

Inside the orange box is another box nicely made from Hawaiian Koa.  It has various square, rectangle, and rounded slots cut out of it.  Inside the box are pieces made from Canxan, Catalox, Bloodwood, and Chakte Viga.  So far, nothing unusual.  It looks like a typical packing problem with the pieces already packed in the box.

The first odd thing of note is the face of an alien with a strange sparkling hair bun on the top of the puzzle.  Apparently, this is a visitor from another dimension and the goal is to rescue the visitor as well as the components of his spaceship from the void (aka the inside of the box).  There is obviously some time/space warping occurring inside the 3x3x3 box since you need to extract a spaceship (made from Paduak and Walnut), two antenna assemblies, a silver fuel disk, a gold reactor orb, and a six-orb navigation AI module.  I was tracking it all until the end.  How could you possible get a six-orb navigation AI module in there?  Well, I was quite surprised when it unexpectedly showed up – on the towel – as if by magic – out of the void – Uh Oh! 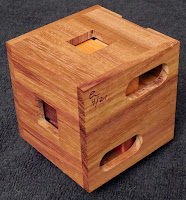 I tried to acquire the ResQ version with all the vortex pieces made from Ebony, but failed.  Somebody was looking out for me.  After solving the puzzle, I’m glad that I had the mixed wood version.  Having all the pieces made from the same wood would make it more difficult and not in a good way.  Of course, that’s just my opinion and if I had acquired an Ebony copy, I’m sure that I would be crowing about that version.  I’ll be interested in hearing about the solve experience from the Ebony owners.

It looks like there was at least one design change after the box was made.  There is a feature that did not appear to be used and caused me to hunt around for something that I may have missed or lost.  I guess that you could just call it a space fish on a long wavelength.

The SD aspects of ResQ are very well done and obviously required a fair amount of experimentation to ensure that everything worked as expected.  However, the real challenge is manipulating the vortex to get things where you need them.  Once you have that figured out, everything is much easier.

I can’t stress enough, that everything is so well made that it looks innocent when in reality, it packs a lot of puzzling in a small amount of space.  The Mechanical Puzzles discord had several messages from puzzlers with difficulty finding out how to unlock the vortex at the beginning since it was so well hidden.

I was initially reluctant to look at the reset instructions to put everything back together, especially since it has a ** SPOILER ** warning, but I’m glad that I took a peak and looked at it.  Although it does have some spoiler information that you wouldn’t want to see before salvaging everything from the vortex, it basically provides the initial configuration of the vortex.  Of course, you can store the vortex in another configuration, but I’d bet that the initial configuration is probably designed to require the maximum number of moves to solve.  Don’t be afraid to use the Reset Guide.  In fact, the final goal recommends using the diagram to reset ResQ.

Happy Anniversary! - Another Year of ZenPuzzler

ZenPuzzler has reached the end of its second year.  I was originally worried that there wouldn’t be anyone reading the blog, but I’ve since received confirmation that, indeed, there are people that have seen the blog.  However, I’m not the least bit discouraged by the requests from designers and craftsmen requesting that I don’t blog about their puzzles.

To wrap up the year, I have created a list of the weekly posts and the puzzles that are mentioned in each.  The name of each post is linked to the entry so that you can easily jump to it by clicking on the name.  Puzzles not included in the photos were either borrowed, gifted, or just plain forgotten on the shelf behind me in plain sight.

21 APR 21 – Like a Dead Skunk in Your Tire Well, Some Things Just Don’t Go Away - Completely Broken Soma, Part 2

7 APR 21 – And The After Dinner Mint – Peppermint Basket