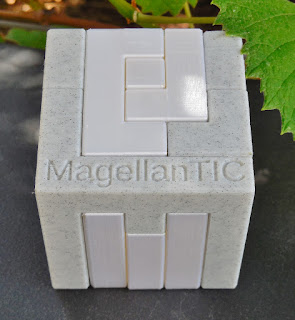 What happens when you increase the design space for new puzzles requiring a lot of rotations?  You find something suitable to name it after like the MagellanTIC spiral galaxies.

My buddy, Andrew Crowell, is taking his goal to stump me very seriously.  He has graduated from 4x4x4 Turning Interlocking Cubes (TICs) to a 5x5x5 format to provide more opportunities to frustrate hopeful puzzle solvers.  The first in this new format is MagellanTIC.

I recently acquired a 3D printed copy of MagellanTIC from Andrew to enjoy.  It is comprised of 6 pieces: A frame, 3 square rings, and 2 burr sticks.  One of the rings is really a partial ring, but I’ll simply refer to it as ring anyway.  The pieces were nicely printed in 2 different colors: speckled gray for the frame and one of the burr sticks and brilliant white for the other pieces.  As with most of his 3D printed puzzles, Andrew has the name of the puzzle embedded on the frame.  However, he liked this puzzle enough to embed his name as the designer on the inside of the frame as well.

The larger size of this puzzle required a larger effort to solve it.  Let’s break the solving process down into steps.

1) Determining where all the pieces go in the frame - Easy.  In fact, When MagellanTIC arrived, it was already assembled except for one last piece that needed to be inserted.  Not one to trust a partially assembled puzzle, I took it completely apart and left the pieces to sit overnight.  Sometimes puzzler designers can be sneaky buggers and if there is a right way and a wrong way to put those pieces in, you can bet that it would arrive the wrong way.  My apologies to Andrew, who did send them packed in the correct orientation.  Of course, without that one critical piece, it is trivial to take apart and is a great way to ship the puzzle.

2) Determining the order that the pieces have to be added to the puzzle - Easy.  Although I did have the last 2 pieces to be inserted in the wrong order.

3) Accomplishing all the rotations and translations to get it all together - Anything but easy.  In fact, it required a lot of effort and I spent several hours putting it together followed by a couple more hours analyzing the moves.

4) Taking it back apart - Tough.  I took my first picture of MagellanTIC when it was originally assembled.  As I was basking in the glory of a triumphant assembly, my wife casually mentioned that I should take it apart and take a picture of the pieces before the lighting changed.  Easier said than done.  It is not a trivial disassembly.

5) Keep repeating steps 3 and 4 - Interesting.  The movements required by this puzzle are not easy to remember and even after putting it together and taking it apart several times, it still required concentrating on the moves to successfully execute them. 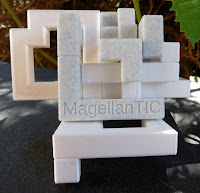 My best estimate at the level of difficulty for MagellanTIC is 15.4.13.9.3.  With all the complex rotations involved, these numbers might be significantly different from your own assessment.  Of course, when assembling the puzzle, you’re working the level of difficulty from right to left.  The first time around, the number of moves was easily in the hundreds as I was rotating pieces unsuccessfully trying to get them in position.

When focusing on assembling a puzzle, you sometimes miss out on the how nice the movements are.  It is not until you have it assembled that you can focus on the moves to accomplish the desired solution.  Let’s look at each piece in the disassembly process:

15)  The first piece takes 15 moves to remove it from the puzzle.  The rotation required to move this piece is nicely designed and much more obvious when taking it apart than putting it together.  I completely missed out on how nice it was when assembling the puzzle for the first time.

4) This one took me a bit of work to figure out how to start the insertion into the puzzle.  Note that at this point of the assembly, there were already 3 other pieces in the frame.  When I was disassembling the puzzle, this piece just fell out when I wasn’t looking.  What originally was a tricky task during assembly, turned out to be relatively simple as demonstrated during the disassembly.

13)  This is really the crux of the puzzle.  I spent most of my time working through this part.  It’s a little rotating nightmare.  The first time that I thought that I had solved this section, I had it in upside-down.  I didn’t even realize it was upside-down until I tried to add the next piece and discovered that it couldn’t reach its final resting place because of the incorrect orientation.  Unfortunately, that meant that I wasn’t even close.  It was much more difficult to put it in correctly.  Imagine that.  Personally, I found this stage a bit of a brain warping experience, and even though I can manage it quite well now, I found it difficult to count the moves with all the rotations.  Unfortunately, I started working on this puzzle late at night and had to put it down until the next day while in the middle of this part.  When I came back to it later the next day, I had a difficult time getting the pieces back out for another attempt.

9) Once you spend time analyzing the puzzle during the disassembly process, you discover that this part of the solution doesn’t really take hundreds of moves to accomplish.  In fact, at 9 moves including rotations for only 2 pieces in the frame, it is fairly short and sweet.  However, short and sweet does not mean easy and I still have to pay close attention during this part.  It is nearly impossible to figure out how to accomplish this when assembling the puzzle for the first time.

3) How difficult can it be put a single piece in the frame in 3 moves.  Well, during the disassembly, it’s trivial to take it out.  However, during the assembly, you have no idea where it is required to be and this needs to be discovered simultaneously with the next piece.  And yes, it does need to be in a very specific location.

At this point, I’ve taken the puzzle apart and reassembled it many times.  Although I can perform the moves fairly proficiently, it requires a good memory and a deft touch to keep all those rotations at a minimum.

So what does the larger design space get you?  Both the high number of moves to release the first piece and the complex rotations we’ve come to love in the TICs.  There are also no visible voids in the assembled puzzle.  If TICs are your thing, you don’t want to miss this one.  I highly recommend it.  If you’re adventurous, don’t forget to get it unassembled.

This is the sixth post of the monthly Andrew Crowell Rotations and Obstructions Series - Turning Interlocking Cubes (ACROSTIC).  You can find the prior posts of the series here: