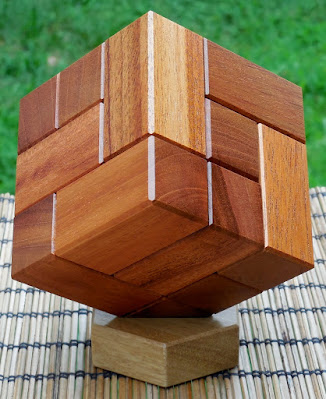 Once again, Pluredro has released a sequential discovery (SD) puzzle that sold out in minutes – 140 in 4 minutes to be exact.  This provides all the background you need to understand that Junichi (Juno) Yananose’s puzzles are well appreciated and coveted.

When the Sequential Discovery Cubic Box (SDCB) arrived, it looked like a nice 3x3x3 burr puzzle made from Fijian Mahogany.  It also comes with a nice Spotted Gum stand.  A little shake dispels that concept and gives you the first hint of other things waiting to be discovered inside.

Since spoilers of any kind are deeply frowned upon for SD puzzles, they can only be described in the vaguest of terms.  So the first move is cool!  I wish that I could say that it was the result of some brilliant thinking on my part, but like a lot of things in my life, it just happened.  But it’s so cool!  At this point you find yourself committed to the journey since there is no obvious immediate way to reset the first move.

The second move reveals that this is indeed an SD puzzle and not a simple 3x3x3 Burr.  Several secreted caches of tools, compartments, and receptacles are revealed.  However, most of it is just a tease, since they all seem to be safely nestled in their beds without an obvious way to release them.

Although there are several steps that comprise the solution, you’re never really in danger of not knowing what the next step is.  The path is well defined, mostly linear, and focused more on fun than difficulty.  So how do you know when you’ve completed the journey?  It’s over when you finally find Juno’s stamp – or I should say that this is the beginning of the reset process.  Resetting the puzzle is straight-forward, including the first step, which is especially fun.

I didn’t treat solving the puzzle as a race and took my time enjoying and understanding how each step worked.  Juno employed a lot of nice mechanisms in the design and its worthwhile spending some time to appreciate them.  There was one move that I’m sure has a more elegant procedure than the one that I used.  I searched for an alternative after solving the puzzle but was unable to find one.  Everything else was so well thought out that I’m convinced that I’m missing some subtle nuance of the step.  I’m looking forward to getting confirmation on that step someday.