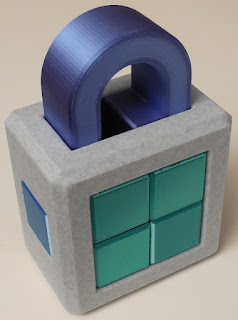 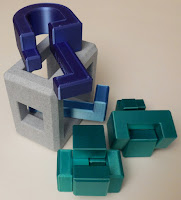 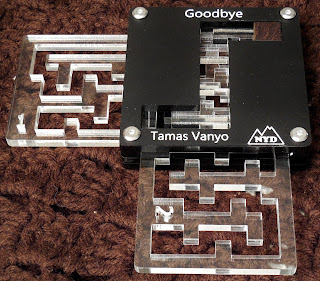 Yes, we could have wrapped up this blog entry right there but I felt compelled to add some other details.  Goodbye is a puzzle designed by Tomas Vanyo and made by NothingYetDesigns (NYD).  It’s made from laser cut acrylic with a bolt in each corner to keep it all together and includes a little wooden piece made from Cocobolo.  What really caught my attention was the matte black finish on the face with the white lettering.  It has such a clean look to it.  I also liked the clear mazes but they were a real challenge to photograph.  The little wooden piece was made for NYD by Nedeljko Woodworks.  It’s always nice to see these types of collaborations within the puzzle community.

Zig, zag, zig, zig, zag, zig, zag, zag … and 181 moves later, you can remove the trapped wooden piece.  It’s not very difficult and you are never in any danger of getting lost.  There is also an Aha moment to be enjoyed – no it’s not the fact that you can unscrew the fasteners to take it completely apart and reorganize it.

If you want to continue exploring other possibilities with Goodbye, the maze plates can also be placed within the frame in other orientations.  The 181 move orientation that the puzzle arrives with is the maximum number of moves of all the plate combinations. 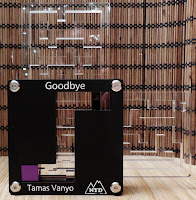 After the initial release, NYD posted a message on the Mechanical Puzzles Discord (MPD) server indicating that that the puzzle configuration was not optimum for displaying the puzzle after it was solved.  It turns out that the puzzle stands up nicely on the edge of the frame, but the engraved wording on the puzzle would be upside-down.  NYD indicated that this could be rectified by simply undoing the fasteners and rotating the engraved plate by 180 degrees.

I did rotate the faceplate of my copy of Goodbye and it does display nicely in that orientation.  Of course, puzzle orientation is a funny thing.  When you start working on a puzzle, you eventually establish what you consider is the orientation for the puzzle.  Someone else may have a completely different orientation from you and you might find it odd watching someone else solve it.  Since Goodbye comes with the name, designer, and maker on it, it provides a strong sense of which direction is up and which is down.  Having already established an orientation of the puzzle before switching the faceplate around, I continue to solve the puzzle in the same manor – now with the words upside-down. 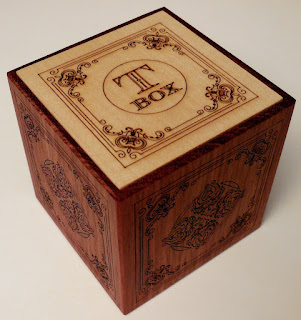 About the same time that I gave my wife her 6T birthday puzzle, I acquired a copy of T-Box, which, pointed out by my wife, also has six T-shaped pieces in a box.  T-Box was designed by Jenga master, Haym Hirsh and made by Mom – no, wait, I had it upside-down - made by Brian Menold at Wood Wonders.  This is the latest of Haym’s designs inspired by Jenga pieces.  For some, Jenga is a multi-player stacking game with wooden pieces, for others it is a source of raw materials for puzzle making.  Hopefully, we won’t see a massive run on Jenga blocks resulting in the worldwide shortages that we saw with tongue depressors (Chico Strikes Again – TD345).

Brian Menold turned the T-Box design into a stunning showpiece.  The pieces were upgraded to Birdseye Maple and the box was made from Bloodwood with a Maple Top.  What really makes this box stunning is the detailed laser engraving on the sides of the box.  Brian is fortunate to have a gifted graphics artist in the family and the design created for the T-Box really makes it something special. 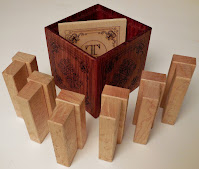 Of course the goal is to get all 6 pieces within the box so that the top lays flush with the sides.  To help, or perhaps to hinder, there are a few impediments attached to the interior of the box.  Solving the puzzle is not that difficult, but it is a nice challenge.  When I was done, I noticed a nice property of the pieces, which can be exploited to solve the puzzle.  I’d like to say that, of course I recognized this property and summarily conquered the challenge in one swift stroke, but as usual, I crossed the finish line with a half-lit bulb.  Perhaps you’ll come across it and immediately recognize it for what it is.  And no, I’m not going to say what it is. 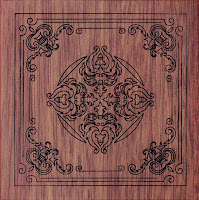