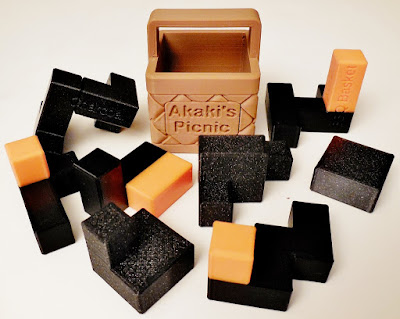 It’s picnic basket season again and Akaki Kuumeri has a couple of new offerings to enjoy?  The new baskets are BBQ Basket and Charcoal Basket.  Shortly after being announced on the Mechanical Puzzles Discord, the models were released on Akaki's Picnic (basket packing puzzle series) Thingiverse page.  I have to say that it’s extremely nice of Akaki to share his designs with the puzzle community as he develops them.  It’s also possible that the new picnic baskets may show up in his AkakiKuumeri Etsy shop at some point. 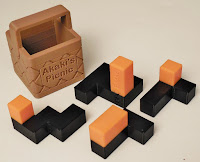 BBQ offers some things that we’ve seen before as well as something new.  I discovered a rotation early on that I thought would be part of the solution but it turned out not to be used.  In fact, it turned out that this rotation occurs easily (and often) requiring you to unrotate (derotate, antirotate, counterrotate – it’s really just another rotate).  Of course, rotating it back is not as easy as the originally unintended rotate.  Once the solution has been found it is easily repeatable.  Akaki has designated the difficulty of this puzzle as medium. 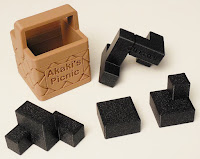 The other basket offering from Akaki is Charcoal.  Prepare to get burned on this one.  I found this one to be much harder than any of the previous baskets (A Tisket A Tasket, Puzzles In – Akaki’s Picnic Baskets, And The After Dinner Mint – Peppermint Basket).  I was a bit surprised to see on the Thingiverse page that the level of difficulty is 9.13.7.2.  Those are some pretty serious numbers for such a small puzzle.  Akaki’s translation of this difficulty level into English is: Unnecessarily Complicated.

This puzzle does a good job of seeming downright impossible.  However, once you find a configuration for the briquettes (outside the basket), it’s a simple process to verify that it is correct by checking that you can remove the first piece in 9 moves.  Yes, you could consider that a hint being provided by Akaki, but believe me, you will be happy to have received it.  Removing the other pieces doesn’t look remotely possible.

One by one, I managed to figure out how to add/remove the final 3 pieces and accomplish the impossible.  There are some epic moves within this basket that will amaze you.  Little did I realize that I had just completed the easy part.  Unfortunately, knowing how the pieces have to move and actually making them move that way are two completely different things altogether.  Things have to be moved/rotated in places that are mostly out of reach.

I printed the contents of this basket in the same format as all the previous ones – small and tight.  That was a big, Big, BIG mistake!  Don’t do it!  You’ve been warned.  I have fairly thin fingers and really struggled to make the moves.  If your mitts are adorned with large sausages, you don’t stand a chance. 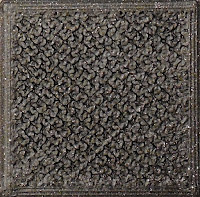 After quite a bit of struggling, I managed to get all the briquettes in the basket.  As nice as the solved basket looked, I didn’t want to leave the pieces in the basket too long, so I tackled the disassembly a couple of hours later.  I was pleasantly surprised (not!) to find that reversing one of the rotations was well-nigh impossible.  I must have spent at least 15 minutes trying to make that rotation.  For a while, I thought that I bricked the basket.  Yes, my basket handle is not glued on and could be pulled off but who would do a thing like that?

Besides getting burned on this one, why is it called charcoal?  I believe that it gets its name from the nice sparkly black filament that Akaki had on hand to print the puzzle.  I felt compelled to also use a sparkly black filament as well, but since I had already used it for the Salmiakki Basket, I used a Hilbert pattern top layer fill to distinguish the pieces.  This gave the briquettes a rougher texture and ironically, a more charcoally look.