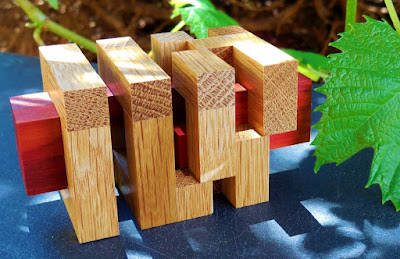 Digging through my treasure chest of unsolved puzzles, I came across Accordian by William Hu.  This puzzle was released by Cubicdissection back in 2014 and has been patiently waiting for some attention.

The puzzle looks like 4 rings surrounding a central bar and is aptly named.  You can grab the ends and pull them apart and then push them back together again.  The rings are made of White Oak and the bar is made of Chakte Viga.  The level 9 solution requires a rotation (did you expect something else with all those rings?) and the tolerances are spot on to accomplish the rotation without any slack in the movement. 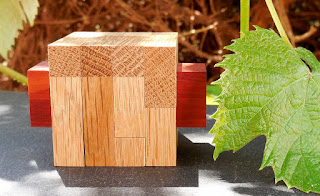 Accordian is all about the rotational sequence required to disassemble the puzzle.  Although the trapped rings move freely along the central bar, you quickly run out of things to do before you start looking for the rotation.  Accordian to the Cubicdissection description, the rotation is very tricky, but I did not find it to be very difficult.  The puzzle really wants to do it and will even start the process for you if you don’t keep a firm hold on the pieces.

Let’s take a moment and hypothesize about what was going through William’s head when he designed this puzzle.  What was his original concept?  Was it form or function?  Did he set out to create something that looks like a cubist’s hotdog or was the original idea based on the accordianesque expanding and collapsing movement? 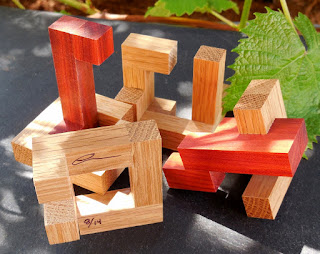 From examining the pieces, it looks like one of the end rings attached to the bar could have actually been separated to have 3 freely moving rings.  All it needed was filling in one of the internal voids to keep it from slipping off the end.  This comment comes with 2 big caveats: 1) until you prototype it, it may look like it would work, but there may be some unforeseen issue that would keep it from working; 2) It may not improve the puzzle and could potentially devalue it.  For instance, in this case, you would lose the symmetry of the pieces if only one side had a piece of ring attached.  The decision to minimize the number of pieces that accomplished the desired rotational movement and keep the piece symmetry was probably the correct choice.

Although everything fits very nicely on my copy, the 2 pieces that form one of the ends don’t quite line up.  I’m assuming that this is part of the puzzle aging process and that the puzzle didn’t originally come this way. Luckily, it doesn’t affect the operation of the puzzle. 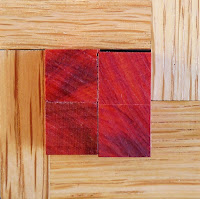