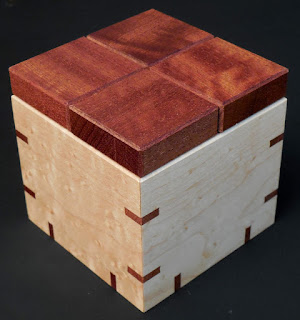 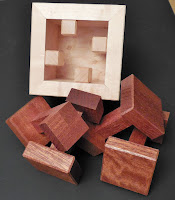 What better time to pull out and play with the Pox Box than during a pandemic.  Why not open up a box with such a label?  How much worse can it get?  Pandora would be proud.

Maybe the word pox has some benign meaning that I’m not familiar with and to be fair, I decided to look it up.  I found 2 definitions for pox in the Mirriam-Webster dictionary: 1) A virus disease characterized by pustules or eruptions, and 2) A disastrous evil: plague, curse.  I’m not sure which of these 2 lovely definitions inspired the name of this puzzle, but it didn’t seem to be as bad as the name implied.

Contrary to what you would think from the name, this beautiful puzzle is fairly innocuous.  It was designed by Yavuz Demirhan and made by Cubicdissection.  It consists of a box made from heavily pockmarked Birdseye Maple and 4 Sapele pieces that erupt like pustules from the face of the box (work with me here, I’m really trying to justify the name of this puzzle).  The Birdseye maple used for this puzzle is spectacular.  The splines that were added around the box are very nicely implemented using concave rounded bottoms.  The extra work done to add a veneered piece of wood to the tops of the pieces looks fantastic.  It hides the joinery that is normally visible on these types of pieces. 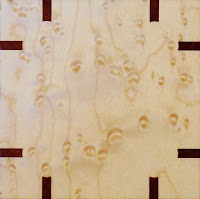 Yes, it’s a puzzle with a box and even has box in the name.  No, it’s not a puzzle box.  It’s a packing puzzle, so the objective is the remove the pieces and put them back in.  Although Pox Box has a level of 7.14.7, it is not difficult.  You’ll notice that as you take the pieces out, they all have the same shape.  That certainly makes things easier.  Not only that, but you will quickly realize that the pieces can only reside in the box in one orientation.  Wow!  The only thing that you have to do is find the order to put the pieces into place.

When the box is finally empty, you can see that there is a shape glued to each side of the box to frustrate the movement of the pieces.  I’ll refer to them as frustrations.  You will notice that they are securely glued to the inside of the box and you can’t take them with you. 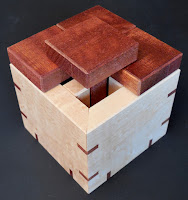 In less than 2 minutes of fiddling, I had all 4 pieces in, except one of the pieces was slightly off and couldn’t be put in place.  It may look close to solved, but it’s not.  I took all the pieces out and then experimented with how each would be able to move given the frustrations and how the other pieces would block movements.  After a reasonably quick analysis, it was fairly simple to get them back into their proper locations.

If you are new to this type of puzzle and want to give one a try, this is a great one to start with.  Don’t let the name scare you off.
Posted by Zen at 12:00 PM