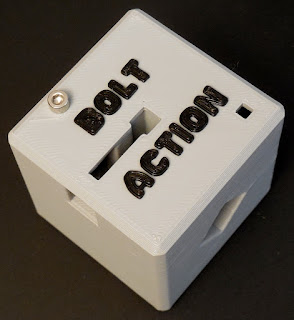 My break from blogging has been rather rudely interrupted with the arrival of Alan Lunsford’s new sequential discovery puzzle, Bolt Action.  It is reminiscent of Alan’s prior sequential discovery puzzle, Unsafe Deposit (Hiding Money in Puzzles - Unsafe Deposit).  Like Unsafe Deposit, Bolt Action is a cube with a US quarter peeking out a window, various holes and slots in the cube, and a bolt screwed into one of the sides.  The new cube is gray with the name of the puzzle embossed in Black.  In one of the square openings, you can see the end of a long bolt wobbling about, but it’s secured on the other end.

Being in the US, I received the puzzle with a quarter inside instead of one of Alan’s own printed coins.  For worldwide distribution outside the US, Alan decided to print his own currency.  As of this writing, the Lunsford is worth about 25 US cents.

The puzzle arrives with a card specifying the goal to remove the coin and find a reason to smile.  What does that mean?  Doesn’t everyone smile when the coin is released?  All I can say is that you will know when you are not done and then when you are.

After seeing various comments about Bolt Action, I expected it to be a similar experience to Unsafe Deposit.  I expected to knock this one out quickly and decided to keep track of the solve time since Unsafe Deposit was so quick. 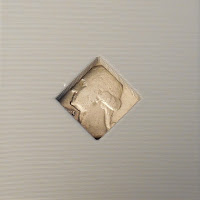 After 20 minutes, I hadn’t gotten anywhere.  I knew exactly how the quarter would be released, but I didn’t have the tools to accomplish it.  Another 20 didn’t give me anything more.  I was pretty sure that I had done just about everything that one could do to this cube and still hadn’t made any progress.  To be honest, after 40 minutes, I was pushing the “No excessive force” rule since I was out of other options.  Tap, tap, tap, spin, spin, band, Bang, BANG!

After an hour, I had to step back and reevaluate the situation.  My options were: 1) I got really lucky on all of Alan’s previous SD puzzles and was now faced with having to really solve one the right way, 2) My mental facilities have started to decay during the quarantine, 3) Something was wrong with the puzzle.  Although all three were just as probable, I opted to pursue #3.  Just after the hour mark, I went out into the garage to look for the box that BA came in.  I shook it and was rewarded with something rattling in the box.  Sure enough, there was a bolt sitting on the bottom under the filler paper. 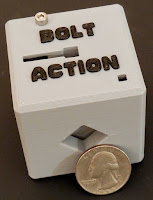 During that first hour, that empty space that I kept opening (many times), attempting to discern its purpose, was for the missing bolt.  Armed with the missing bolt, the coin was removed and the reason to smile was discovered in 5 minutes.

Am I bothered by the fact that I spent an hour trying to solve an unsolvable cube?  Not really.  I enjoyed spending time thinking about how the puzzle worked.  It’s clever and very well made.  And yes, it’s very much on the order of difficulty as Unsafe Deposit.  You can get your own copy of Bolt Action on Alan Lunsford’s layerbylayerpuzzles Etsy shop.

This was just another reminder to carefully unbox puzzles that you receive in the mail.  There are many sad stories from puzzlers that inadvertently threw away a puzzle piece or extra puzzle.  This first happened to me when I accidentally threw out the chicken poop from Eric many years ago now (This Puzzles No Turkey - It's Chicken).