The ZenPuzzler blog will be taking a break.  Hopefully you have found something of interest along the way.  Signing off for now. - Zen 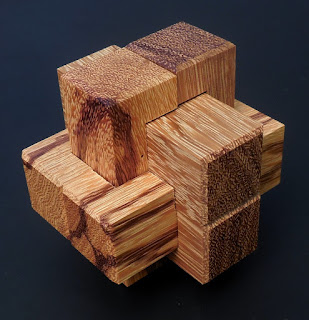 What happens after you’ve completed 336 burr puzzle pieces only to realize that you’ve completely flubbed the measurements for the cuts – You call it a feature and charge extra!

Pure marketing genius!  And Eric Fuller is that marketing genius behind Cubicdissection’s branding drive.  Pavlov would be proud to see the puzzling masses salivating over the sight of cardboard boxes secured with orange tape.

When Inaccurate Burr was released in 2016, acquiring a copy was a no-brainer.  What’s not to like?  Designed by Junichi Yananose, make by Eric Fuller at Cubicdissection, and Oh, that beautiful Marblewood!

As per my wont, I quickly disassembled the burr without paying too much attention so that I could attack it as an assembly process.  Only when I had it apart did I realize that I was a tad impetuous and should have looked at it first to see why it was called Inaccurate Burr.  I’d like to be able to say that this is a rare occurrence, but it seems to occur often.  My favorite is pulling out pieces of a puzzle that I had disassembled years ago with no idea what puzzle it is or what shape it’s supposed to make.  And of course, the ultimate experience is when you acquire pieces of a puzzle with unknown origins.  Some puzzlers even have their friends disassemble multiple puzzles and mix the pieces to provide the penultimate solving experience transcending the normal single puzzle experience, which as you already know, is quite powerful. 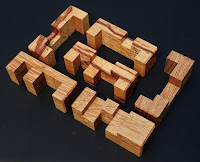 After my initial, what is it supposed to look like? panic, I started to look at the pieces.  Two pieces immediately stood out.  Instead of having cuts that were half way through the pieces, one had cuts two-thirds deep and the other one-third deep.  The natural assumption would be that these two pieces make one of the three pairs of the 6-piece burr and that this offset led to the name’s genesis.

With the first pair is established, it is a fairly logical progression to add the others.  One piece of the pair has a knob that sticks out one-third and one of the remaining four pieces has a notch one-third deep.  Three pieces down!  Another piece can’t go anywhere except to be the third piece’s mate.  Four pieces down!  For the last pair, you would be forgiven if you tried to put them in backwards.  It looks like either way may work, but if you pick the wrong one, you will hopefully, quickly realize and rectify the incorrect positioning.  Once you get it correct, it ONLY takes 9 moves to insert that last piece and get the puzzle into its final inaccurate shape.

This puzzle may not be difficult but it is nice addition to a 6-piece burr collection and looks awesome in Marblewood.

Although it has taken several decades, I finally found something tangible that explains my college motto: Per Aspera Ad Astra - through adversity to the stars.  This something comes from the fiendish mind of that Turning Interlocking Cube (TIC) master Andrew Crowell, who knows that the only thing better than a puzzle is a cluster of puzzles.  With that in mind, he embarked on creating a series of StarTICs.  Of course, he attempted to pack as much adversity as possible within each to entertain us along the journey. 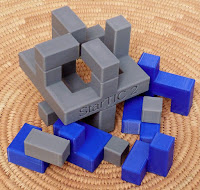 The StarTICs occupy a 5x5x5 cubic dissection space.  Each consists of a gray shell surrounding an inner 3x3x3 core with a unique color for that StarTIC.  Although the core appears solid, each is comprised of several pieces.  The objective is to have the core go critical and eject its mass from the center of the shell.  Bits of the shell may remain stuck to the pieces while some bits of the core may be left behind on the empty shell. 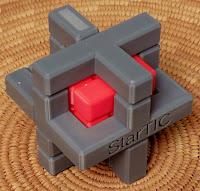 Starting the cluster is StarTIC with its red hot core.  When assembling StarTIC, it’s easy to determine where the pieces go within the shell.  The largest piece contains a large section of the shell and can only go in one place.   Once that piece is in place, the remaining 4 pieces can be divided into 2 that add 2 cubes to the shell and 2 that add 1 cube to the shell.

After careful examination, you can determine that 3 of the 4 shell vacancies look like they can be satisfied by 2 of the core pieces.  The fourth can only be completed by one of the core pieces but it can go in that spot in 2 different ways.  However, it is immediately obvious that only one of them makes sense.  Once that piece is in place, it is obvious where the other 3 core pieces have to go.  The only thing left is to determine the order and movements required to get them in place.  Of course, some rotations will be required, but they are minimal.

My favorite rotation involves the “T” piece that gets translated halfway through the rotation.  I designed a puzzle around this type of move about a decade ago called Interrupted.  It was the only thing that this puzzle had to offer.  One of the reasons that I like Andrew’s puzzles so much is that they have so much more to offer than just a single interesting move. 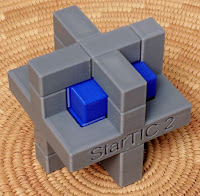 StarTIC 2 has a cold dark blue core.  Unlike StarTIC, the StarTIC 2 frame is only missing 3 small pieces, which can be found connected to 3 of the 5 pieces that comprise the core.

If you are tackling this as a disassembly challenge, you appear to be presented with a catch 22 situation.  It looks like a 2 block chunk of the shell connected to one of the core pieces needs to be removed to get the core pieces out.  However, it also looks like this piece can only be pushed into the core and not pulled out.  It appears that the main challenge is to figure out how to remove this plug from such an obvious exit portal.  Or is it?  You’ll have to see for yourself.

As an assembly challenge, you need to discover the very specific order of adding and rotating the pieces to the frame including plugging that 2 block gap in the shell.  Of course, when adding the first few pieces, a lot of movement and rotations are possible.  Even fully assembled, quite a bit of movement is allowed. 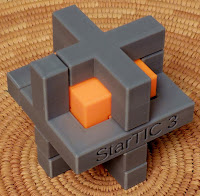 StarTIC 3 sports a cheery orange core, which is comprised of only 4 pieces.  One of these pieces also has a significant portion of the shell attached.  You would think that this puzzle would be easy with the shell separating into such large chunks.  You wouldn’t be wrong either.  I found StartTIC 3 to be the easiest of the StarTICs in the cluster.

With either the disassembly or assembly, it is not difficult to figure out what is going on within this StarTIC.  Rotations and movements are straightforward and shouldn’t prove to be difficult for most users.  If find yourself intimidated by this cluster, start with StarTIC 3. 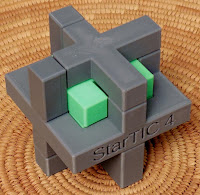 The fourth StarTIC has a cool green core.  As with the other StarTICs, for the disassembly, you will be tempted to remove the piece with the largest piece of the shell attached.  Although there doesn’t appear to be much holding it in place, it refuses to come out.  It takes a lot of experimentation to determine the convoluted dance required of the core pieces, including numerous rotations, to release the first piece.  Once you have accomplished that, it’s all over. The other pieces can simply be plucked out one by one.  If you yank them out quickly without paying too much attention, you can also enjoy the following assembly process.

The assembly process is a lot of fun with StarTIC 4.  All the core pieces have a piece of the shell attached and aren’t difficult to place.  However, finding the right order to add, move, and rotate them will be challenging, especially considering the lengthy sequence of movements and rotations to get all the core pieces in place once the last one has been added to the shell.


The StarTIC cluster is a worthy addition to Andrew’s TICs.  Not a single loser in the bunch -  they’re all stars!

Mangling Wood With Style - In Brackets 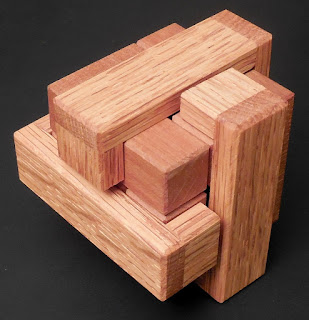 It’s 2021!  A brand new year!  And just like how everyone who wants to forget the prior year, I’d like to leave behind my initial puzzle making attempts.  Then along came Cubicdissection’s announcement that In Brackets by Sam Cornwell (released in 2009) may be rereleased in January 2021.

Back in 2012, when I saw In Brackets on Cubicdissection’s website, Eric Fuller was mostly releasing new puzzle designs and there was no indication that he would change his approach and rerelease prior puzzles.  I also didn’t see any indication that In Brackets was going to be made by anyone else.  So I did what any other wood mangler would do and headed to the garage.

In addition to the nice photos of In Brackets on Cubicdissection’s website, Eric Fuller included the following details in his description (https://cubicdissection.com/products/in-brackets):

Crafted from fine peruvian walnut and zebrawood, this puzzle has a very nice fit and feel.  The cube is precise but not tight, and the brackets have a good feel with a generous .012 offset from the cube. Brackets are constructed with finger joints at the edges to insure strength and long life.

As a new woodworker, I loosely translated this into my own frame of reference and ended up with the following build process:

Cobbled together with Red Oak and Cherry so it won’t fall apart in your hands.  There’s enough slop in there to ensure that the cube doesn’t get wedged in the brackets.  Butt joints are used on the brackets to expedite the build process.

Armed with a solid plan, I marched into the garage and mangled some wood into something that could be reminiscent of In Brackets if you squint at it just right.  This puzzle was one of the first victims of my newly purchased miter saw many years ago and is now part of my eyesore puzzle collection.  However, it is a fully functional puzzle and served to satisfy that particular puzzle itch. 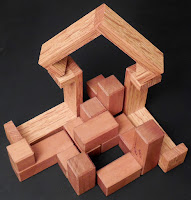 Before, I describe the puzzle, please keep in mind that these comments are based on my homemade copy and a professionally made version may give you a whole other, potentially sublime, experience.

The puzzle consists of 3 pieces that make a 3x3x3 cube with 3 voids and 3 brackets that hold the cube together.  As a puzzle, this one is pretty easy.  Taking it apart is trivial, but to be fair, if the puzzle were tight or incorporated a magnet, it would provide more of a challenge to find the first move.  Of course, since I had made the pieces, it started out as an assembly challenge.

Assembling In Brackets is not difficult and would make a good challenge for new puzzler.  It’s easy to create a cube from the 3 internal pieces.  Once you have the cube, it doesn’t take a lot of analysis to determine how to add the brackets.  Since any 2 brackets can be trivially added to the cube, you only have to determine where those 2 brackets have to go to allow the cube pieces to move into a configuration that permits the insertion of the final bracket.

If you are looking for a challenging puzzle and have been enjoying the wave of Turning Interlocking Cubes (TICs), this one is not for you.  However, if you want an attractive, very approachable puzzle with a novel approach, you will enjoy In Brackets.  Cubicdissection’s 2009 version of In Brackets looks fantastic and I’m sure that if it’s rereleased, it will look even better.