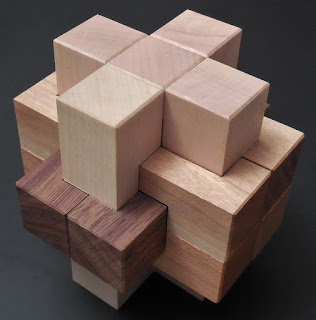 Happy 16th to you!  Yes, today is the 16th of September and we are celebrating with Sweet Sixteen by Jack Krijnen.  Jack developed this unique level 16 burr in 2002 and Cubicdissection released a run in July 2013.  You may recall that I originally pulled this one out and solved it at the end of last year, mistakenly thinking that the puzzle was Happy New Year by Johan van de Konijnenberg, which was the subject of the Happy New Year! post.  Like Happy New Year, Sweet Sixteen is made from Maple (5 pieces), Cherry (4 pieces), and Walnut (2 pieces) and the pieces have a very small bevel on the ends and none along the length.

The puzzle is not difficult to take apart and you can quickly make a pile of pieces from the puzzle.  After the disassembly, I left the pieces to lounge around on a shelf for a while to allow any neural connections created from the disassembly to decay.  After the last gasp of the final associated neuron, I attacked the assembly.  In actuality, I’m sure that I’m deluding myself thinking that I’m still capable of making neural connectivity changes that will survive the time between one breath and another.  I was going to mention something else here but I can’t remember what it was.

I waited until I had a good block of time to solve this puzzle and then sat down to tackle this bad boy and was astonished to have it assembled in less than 1 hour.  I was able to break the assembly down into several smaller steps that led to logical progression of assembling the pieces.  Of course, I could have also have been assisted by an extra helping of luck.  Sweet Sixteen has 1 more piece than Happy New Year (11 vs. 10), but I found it slightly easier to solve.  It is the perfect introduction to higher level burrs with more than 6 pieces.

The remainder of this blog contains some information on how I proceeded to solve the puzzle, which may be spoiler for those planning on solving this puzzle.  Normally, I don’t like to post anything that can remotely be considered a spoiler, but since this puzzle has been released more than 6 years ago, I’m guessing that most copies in the wild on collector’s shelves won’t mind.  If you are just preparing to pull this one off your own puzzle backlog, you may want to stop reading here until you’ve solved your own copy.

The first clue is a gift.  The pieces were made from 3 different types of wood that correlate to the orientation of the pieces.  I suspect that the solution would have been significantly more difficult without this information.

Since there were only 2 walnut pieces, I started with them.  There are only two ways that they can be put together and more information was needed before determining the correct one which would hopefully become apparent when experimenting how they could fit within the 4 cherry pieces. 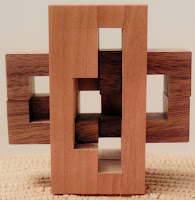 When adding the 4 cherry pieces to the 2 walnut pieces, I quickly realized that the combination of pieces needed to leave an opening for each of the 5 maple pieces that go through the puzzle.  It became evident that the cherry pieces had to be divided into 2 sets of pairs to acquire the 5 holes but not how the pairs were oriented with each other or the orientation of the walnut pieces inside.

The design of the 5 maple pieces provides clues to their location within the puzzle.  With some inspection, it can be determined which piece is the middle piece, which 2 pieces are sandwiched by the ends of the walnut pieces, and which pieces are at the end of the 4 cherry pieces.  With that information, it is possible to orient the cherry and walnut pieces to accommodate the 5 maple pieces.

It’s easy to add the 3 maple pieces that go through the cherry pieces, leaving only the 2 maple pieces trapped by the ends of the walnut pieces.  Disassembling the puzzle to the point where the 2 pieces can be added is straight-forward and quick.  Only one other piece had to be temporarily removed and then added back in after.

And there you have it.  A little insight into one way to tackle this particular 11-piece burr.  Hopefully there is something that you can use to when solving these types of burrs in the future.