Puzzle madness has gripped the world!  A once humble community of puzzle enthusiasts has morphed into an insatiable world-wide puzzle-gobbling beast.  Reports of shopping cart thefts and shop crashing are now commonplace on puzzle messaging sites.

Puzzle demand now far outweighs the supply generated by a few key craftspersons around the world.  The entire internet can be felt sagging as puzzlers around the world refresh their screens multiple times per second in the anticipation of newly released puzzles.  Mom & Pop puzzle shops are collapsing under these loads forcing a migration to more sophisticated ecommerce website providers.

For the holiday season, Brian Menold at Wood Wonders decided to embrace this madness and held a special 24 hour “Snatch the Puzzle” event on Black Friday, 27 November 2020.  During the event, puzzles were randomly made available at deeply discounted prices as a way of saying thank you and providing some holiday fun for the puzzling community.  It consisted of puzzles from recent and future releases as well as some other goodies like puzzle stands.

However, Brian took pity on everyone.  To avoid having everyone repeatedly hit the refresh key for 24 hours (please don’t take this to mean that I don’t think there aren’t people up to such a challenge), he periodically posted clues via Facebook on 25 and 26 November 2020, providing hints at the times that he would be releasing puzzles:

Who couldn’t pass up an opportunity like that!  Like everyone else around the globe, I continually mashed the refresh key at what I hoped were the release times in an attempt to grab a puzzle.  Most of the time, I managed to get a puzzle in the cart, only to have it disappear before checking out.  The event was almost over before I managed to successfully acquire a puzzle.  When my wife asked me what I bought, I sheepishly looked at her and said “I have no idea.  If you have to look at it before you buy it, it will be gone.”  Of course, all of Brian’s works are wonderful and you really can’t go wrong.  Shortly after the event, I received a box from Wood Wonders with 2 puzzles. 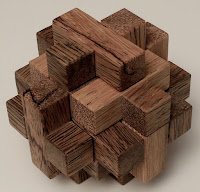 I initially had the opportunity to solve a copy of Cluster prototype that Brian brought to RPP last year (A Decade of Puzzling - RPP 2019) and was glad to finally acquire a copy.  The version that I received was made from Cambodian Ormosia.  It has an awesome grain looking like black bolts of lightning running through the wood.  It also has an interesting distinctive scent that reminded my wife of Sandalwood.  Cluster was designed by Andrew Crowell and it should come as no surprise that rotations are required to solve this puzzle.  In fact, all the pieces require rotations.  One of the pieces makes a rotational circuit through the puzzle, which I consider the highlight of the puzzle.  The puzzle is not very difficult, but the crystal shape requires some out-of-the-box-shape thinking. 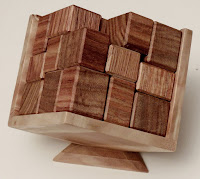 Inelegant Box is my second acquisition from the Inelegant Puzzle series by Haym Hirsh made by Wood Wonders.  My first was Inelegant Fake (Not Your Elegant Hoffman Packing Puzzle - Inelegant Fake).  Like Fake, Box is made from 4x5x6 unit blocks that have been joined into 6 "L" shaped pieces consisting of 4 blocks each.  Since this consists of only 24 blocks, the completed cube is missing 3 blocks.  One of those blocks is the center of the cube making it hollow – aka a box.  This puzzle is not that difficult, but you do have to keep in mind that that there are missing blocks and you may have a difficult time solving this puzzle without that in mind.  The version I received from Brian was made with Canarywood and has a beautiful reddish grain to it.  It also came with a Curly Maple frame that shimmers as you tilt it. 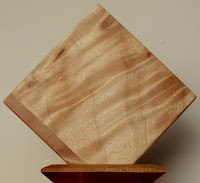