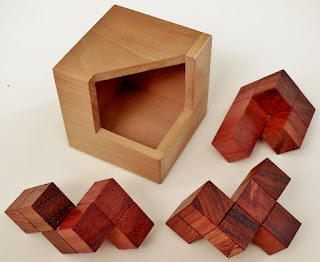 I recently received a Pumpkin that was already cut open with its guts spilled out.  At first glance, I looked at its big carved mouth and 3 simple guts and thought – this is going to be easy.  It wasn’t.  It was surprisingly engaging and entertained me for a considerable amount of time.  I didn’t solve it by midnight and it turned into a puzzle.

Pumpkin 1 was designed by Osanori Yamamoto and made by Pelikan Puzzles with a Pear box and Bubinga pieces.  It is an apparent cube packing puzzle (i.e., the opening of the box is completely filled and any empty space is hidden within the box).

There are a few ways to address the solving process for these types of puzzles.  The first is to find an assembly for the pieces and then test the assembly against the disassembly that is constrained by the opening of the box.  This works best when there are a small number of assemblies.  They usually have a smaller number of pieces as well as a smaller number of voids in the solved cube.  Pumpkin 1’s 3 pieces certainly meet the small number of pieces criteria, but there are 9 voids within the solved puzzle.  Playing with the pieces, there seemed to be a surprisingly large number of ways to assemble them within a 3x3x3 space.  After solving it, I checked with PuzzleWillBePlayed (PWBP) where it indicated that there are 54 assemblies with only 1 of the assemblies provides a working solution.

Another way to tackle the problem is to determine how the pieces can be inserted within the frame through the restricted opening.  However, with Pumpkin 1’s wide open corner, there isn’t much that isn’t allowed.  And yet, it’s not easy to get all the pieces in there as an apparent cube.

At one point, I was hoping that I was correct in assuming that it really was an apparent cube puzzle since I had found at least one solution where all the pieces went in, but there was a visible void.  While we’re talking about making assumptions, I wasn’t aware of the puzzle’s level while solving and was assuming that it took more than 1 move to remove the first piece, which is true for most puzzles of this type.

I finally decided to tackle this particular puzzle by working it from the other end and testing how pieces may move in sequence to release them from the box.  For the first move, does the piece start to come out or does it go further in?  Does 1, 2 or all 3 pieces move together at the same time?  How would that movement allow another piece to move?  Rinse and repeat.

The pieces do allow for some interesting movement.  At one point, I discovered an interesting sequence of moves that seemed to have promise.  Unfortunately it wasn’t the solution I was looking for.  I kept searching for other sequences but couldn’t find anything else even close.  I kept going back to that sequence of moves and tried to find ways to tweak it into submission.  Sadly I couldn’t find anything else.  Even sadder, it was the real solution but I failed to recognize it.  As it turned out, I could have solved it before midnight if I had paid better attention.  That’s the danger of working outside the box.  Sometimes there’s a difference between the virtual world and the real world.

I also learned on PWBP that there are 2 other Pumpkin designs by Osanori – strategically named Pumpkin 2 and Pumpkin 3.  After looking at the other 2 designs, I couldn’t find a similar feature that relates them.  However, Osinori generates so many designs, I can’t blame him for genericizing the naming process.

Are You Worthy? – Enter If You Can 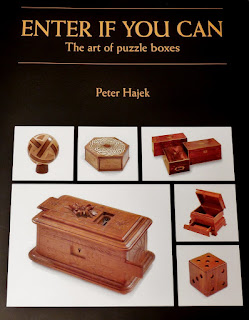 And now for something completely different and yet somehow refreshingly exactly the same.  In a slight departure from the normal blog fare here at ZenPuzzler, instead of presenting a puzzle, I have the pleasure of presenting a newly released book about puzzles, or more specifically, puzzle boxes.

The book is well-written, informative, and full of beautiful photos of a large variety of puzzle boxes.  Its greatest failure (or strength) is that the reader is left wanting more.  In fact, I would have enjoyed an entire encyclopedia on the subject matter with each chapter becoming a book of its own.  Of course, this is a characteristic of a well-written book and I’m certainly looking forward to the next one.

The book is available in 2 formats – book only and book with lock.  The locked version ensures that the petitioning reader is worthy of receiving the knowledge within and incorporates a strap attached to the back cover that connects to a lock attached to the front cover.  Of course it is a puzzle lock that has to be solved to open the book.  The lock was designed and made by Master Locksmith, Shane Hales of Halespuzzles.