And The After Dinner Mint – Peppermint Basket 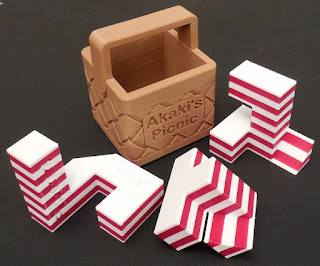 After completing all those Picnic Baskets that Akaki Kuumeri made, what’s left.  The after dinner mint of course.  Akaki decided to top off the Picnic Basket series with what he called a Final Boss Puzzle.  For those of you who didn’t grow up playing video games like Mario Brothers, the boss character is usually the big bad character that you need to defeat at the end of a level.  The final boss is the toughest, meanest, and most difficult to defeat character at the end of the game.  And Akaki succeeded in developing his final boss picnic basket – Peppermint Basket.

Like the prior 13 picnic baskets (A Tisket A Tasket, Puzzles In – Akaki’s Picnic Baskets), the Peppermint pieces fit within the same picnic basket.  However, the first thing that you will notice is that the pieces have diagonally cut half cubes.  These cuts allow for some new types of movements/rotations needed to solve the puzzle.  The second thing that you will notice is that there are only 3 pieces and that there is a lot of empty space in the assembly.

This puzzle is reminiscent of Andrew Crowell’s Turning Interlocking Cube (TIC) puzzles where the difficulty is getting the first 2 pieces situated within a frame against their wishes.  I printed the standard version of Peppermint with the tighter tolerances and the rotation required to resolve the positioning of the first 2 pieces is very precise and not easy to discover.  There are also several almost possible rotations, but don’t be tempted to force it.  One of these almost possible rotations is associated with a false assembly.  I’m sure by now that you can tell that I spent a bit of time trying to solve this one.  Getting the last piece in is not difficult, but I liked how the movement worked.

If this is the end of the Picnic Basket series, this was a great final puzzle.  Akaki did an awesome job designing this final challenge and made good use of the diagonally cut cubes.  More final boss puzzles please!

So why did Akaki label Peppermint as Akaki Basket #16 if there were originally 13 picnic basket puzzles?  What happened to 14 and 15?  If I had to guess, one of those is a prior version of Peppermint that Akaki didn’t release because it had an unintended short cut in the solution.  I would guess that the other is: 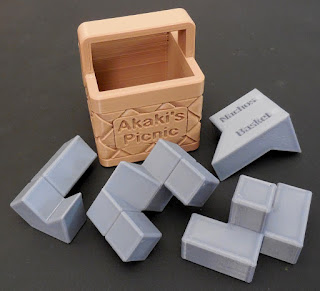 Puzzle designer extraordinaire, William Hu, took up the challenge to create a picnic basket for the series.  Like Peppermint, Nachos uses diagonally cut half cubes.  With 4 pieces instead of 3, it was a bit more difficult to find the piece assembly, especially since there is a lot of void space in the final assembly.  The empty space and angled cuts also make the puzzle fiddly to play with outside the basket when figuring out the moves required to insert them.  The well thought out movements earn this puzzle its difficult rating although I found it quite a bit easier than Peppermint.  More please!

Model files for printing your own copies of Peppermint and Nachos are freely available with the other Picnic Baskets on Akaki's Picnic (basket packing puzzle series) Thingiverse page.