A Puzzle to Save the Day - Mighty Pin 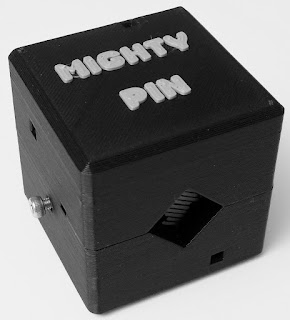 Once you’ve had a couple of successes, people start to expect it from you.  I’ve never had to worry about that, but after Alan Lunsford’s successful launch of Unsafe Deposit and Bolt Action, he must have been wondering if his latest entry in the series, Mighty Pin, would continue to garner the high praise achieved by its predecessors.  If you haven’t yet had a chance to play with Mighty Pin, not to worry, it’s a worthy successor of the coin cube conundrum series. 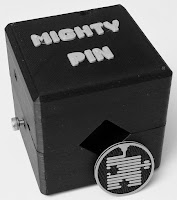 If you have not been acquainted with Alan’s c3 series, each puzzle is a cube with a coin visible in a window that needs be freed from the cube.  Each requires multiple steps, utilizing tools that become available during the journey.  My favorite part of these puzzles is the engineering that Alan packs within these little cubes.

The Mighty Pin is 3D printed in black with the name debossed in grey.  Similarly, the coin is black with grey debossing with Alan’s logo on the exposed side and a stylized “A” on the flip side.  Of course, the box also has an assortment of mysterious holes to eventually be explored.

The c3 puzzles are more fun than difficult and Mighty Pin continues that trend.  However, it took me a while to discover the second to last move of Mighty Pin.  I danced around the correct move many times until I finally figured out what was required to be rewarded with yet another tool.  It’s so well done (and so unobviously obvious in retrospect).  I accomplished the last move much quicker, but you can’t fully appreciate it until you free the coin to see exactly how it works.  That final “click” is very satisfying as it lets you know that you’ve arrived at your destination.  As I mentioned earlier, the engineering is awesome!

As with the other puzzles in the series, Mighty Pin comes with a nice card that outlines the goal.  My favorite part was the note: “small taps may be used to loosen misplaced tools”.  This can be loosely translated as: “yeah, you may regret dropping tools in the bottomless dark holes”.  However, I give Alan a lot of credit for coming up with a design that seems to preclude unrecoverable mistakes although I wouldn’t be surprised if some enterprising individual manages to wedge a tool somewhere it’s not supposed to be (force = frustration x time).  {Unrefined comments about mighty pins in dark holes purposely avoided here – you’re welcome.}

Will there be a fourth in the series?  One can only hope.  My guess is that Alan has developed a cache of ideas during the development of this series that may get incorporated into new puzzles in or apart from the series.

You can get Mighty Pin and Alan’s other puzzles on his layerbylayerpuzzles Etsy shop.  Since Mighty Pin just came out, you may have to wait for it to be stocked again.