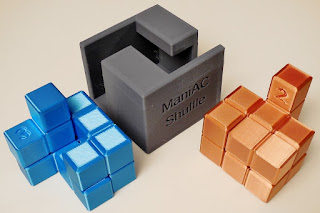 That maniacal puzzle designer, Andrew Crowell, has been at it again.  Back in September, I reviewed Andrew’s initial foray into developing what is being referred to as apparent cube puzzles (Apparently Packing Puzzles - Corner Cube, Edge Cube, Angle Cube).  The objective of these puzzles is to pack some reluctant puzzle pieces into a box with one or more restricted openings such that the box appears completely full.  I say reluctant, because it can be difficult to cajole those pieces into their proper positions with multiple twists and turns.

Andrew’s new apparent cube puzzles come with two sets of pieces for twice the frustration.  The first one that I tried was ManiAC Shuffle.  Please note that Andrew highlighted his initials in ManiAC - or does that stand for Apparent Cube?

As with the prior apparent cubes, ManiAC shuffle is 3D printed and consists of a gray frame and a set of 4 bronze pieces debossed with the number 2 and the another set of 3 blue pieces debossed with the number 3.  Andrew had help with naming the puzzle and number 1 got lost in the shuffle.  Apparently, the honor of naming the puzzle went to the first person to solve it on the Mechanical Puzzles discord group.  The blue and bronze pieces are made with the shiny PLA and look awesome!

One good hint for solving this type of puzzle is the realization that it takes several moves to take the first piece out when it is assembled.  If you are contemplating a configuration of pieces where the last little piece just gets shoved in a hole in one move, you’re on the wrong path.  Another little hint for you is that the debossed numbers on the pieces are not visible when the puzzle is solved.  Before you all start jumping up and down crying that I’ve just ruined your solving enjoyment, Andrew placed all the numbers on inside faces of the pieces.  You didn’t really think that I would give you any kind of useful clue, did you?

I initially solved both ManiAC challenges a couple of weeks ago and then solved then again to refreshed myself on the solutions for this post.  The first time that I solved ManiAC, I started with the blue pieces that were numbered 3 and I did the same when I solved it this time.  I just assume that fewer pieces equates to easier and I always like to start with the easy one.  Well, I can tell you that after sitting around for a couple of weeks, it wasn’t any easier the second time around.  Tough little bugger for only three pieces.  One piece is 3x3x1 so it can only go in the 3x3x2 frame laying flat and there only seems to be one way that it can be inserted.  With one piece down, you would think that it would be close to being solved.  Not quite.  It took some effort to figure out how to add the other 2 pieces.  Of course, every piece has to be rotated and one of the rotations is a real dexterity challenge!

The bronze set seemed easier than the blue set, but to be honest, when you’re working on a few of these at a time, your brain gets a little warped as you work through them and you can start to see around the corners more easily.  Unlike the blue set, not all the pieces have to be rotated.  However, you will start to recognize the common theme of having to insert a piece in an orientation that does not seem possible.  It’s also amazing how many moves such a small number of pieces require to make an apparent cube in the frame.  A lot of these moves are accomplished by tilting the box in various directions to get the pieces to slide where they need to go.  Yes, you’ll look like a maniac.  Be sure to do it with your tongue hanging out!