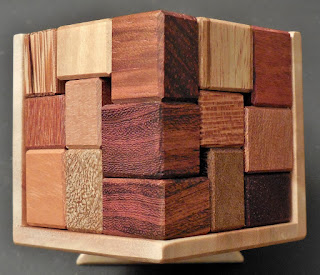 What happens when you dump a Hoffman Packing Puzzle into a mixing bowl, add some glue, and stir vigorously, losing some pieces in the process.  Well, you’d end up with glued bits that would certainly be less elegant than a Hoffman cube.  Even if it looked like a Hoffman Packing puzzle, it wouldn’t be genuine without all the pieces.  This, I suspect, was the genesis of the Inelegant Fake name.  However, it really is a misnomer since there is nothing inelegant about it.  It looks like a lot of care went into the design and construction beyond a mixing bowl.  I also doubt that anyone besides myself makes puzzles using a mixing bowl.

Inelegant Fake is the sixth puzzle in Haym Hirsh’s Inelegant Series, aka: Let’s Abuse The Hoffman Packing Puzzle Line.  Prior puzzles in the series include Inelegant Soma, Inelegant Box, Inelegant Cube, Inelegant Snakes, and Hoffman JR.  Before you get all worked up about the name of that last one, it was originally named Inelegant 5x5 before the marketing department got ahold of it.  I have it on good authority that the puzzle design reviewer insisted that his initials be added to the end of the name to memorialize his contribution.  {Of course, if you know enough to recognize who this is, you also know it couldn’t be further from the truth.}

Inelegant Fake was one of the many beautiful puzzles available in the last Wood Wonders release from Brian Menold.  The pieces are made from a variety of exotic woods and a frame is included to display the solved puzzle.  The frame is also very handy for holding the cubes as you assemble the puzzle. 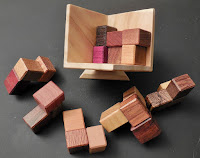 Each of the pieces is made by joining 3 or 4 smaller bits together.  You’ll notice that there is not a single 2-bit piece in the bunch.  Adhering to the Hoffman Packing Puzzle design, each of those bits is an identically sized cuboid where the length, width, and height are all different.

In complete opposition to the Soma cube, Inelegant Fake has 6 pieces with 3 bits and 1 with 4 bits.  Doing some extraordinary complex math and rounding off wherever possible, I deduced that the puzzle consisted of 21.3 22 bits.  Since the Hoffman Packing Puzzle consists of 27 bits, roughly 5 bits escaped the mixing bowl.  So, this raises quite a few questions of how those missing bits are being utilized to frustrate the puzzler.  In fact, so many questions were raised that I started to call it the IF puzzle.  If I assume that the missing bits were here, I could…  If the 4-bit piece were located there, I could …  If the designer were as evil as Kevin claims I am, he would have …

It turns out that Haym is not that evil.  The missing bits were exactly where I initially assumed they would be and so was the 4-bit piece.  Armed with prior Hoffman Packing experience and the fact that my initial assumptions were correct, I was able to produce a nice inelegant fake cube for display within the stand.  Now, the only question is, what other 3x3x3 construction should become an inelegant puzzle?