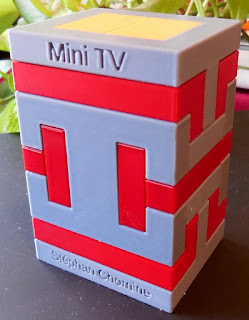 When I saw that the mad puzzler, Mr. S., wrote a post on the hefty looking 6T Burr puzzle by Alfons Eyckmans (Alfons Proves I'm Improving...), puzzle envy set in and I was looking forward to trying that level 22 puzzle someday.  As soon as I resigned myself to a long wait, the puzzlewillbeplayed site added a new level 18 puzzle by Stéphane Chomine with a similar format called Mini TV.  The size was reduced by quite a bit compared to Alfons’ 6T Burr and I decided to print a copy to play with.

The puzzle is very approachable and not too difficult to solve.  Of course, since it was printed, it was an assembly challenge.  It takes a lot less time to solve than to print.  It took about an hour to assemble the puzzle. 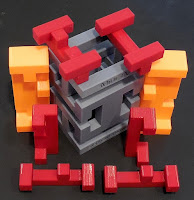 Assembling the puzzle follows a series of logical steps and some experimentation.  One of the 6 transverse pieces provides a significant clue on how the core pieces need to be oriented with respect to each other.  This in turn identifies how the 2 middle transverse pieces need to be placed.  The remaining 3 pieces then provide the final clues as to the exact orientation of the 2 core pieces.  Then it’s just a matter of putting the core pieces within the frame and adding the transverse pieces one at a time until it’s all assembled.  Of course adding the first few is trivial (one is just decoration) while the last basically requires going through the complete disassembly to get to a point where it can be added.

The assembled puzzle is very attractive and like the assembly is very approachable as a disassembly challenge.  The only issue that I had with the design is that the transverse pieces have a tendency to rotate out from the puzzle when they are moved from their initial position.  You have to constantly ensure that they stay within the frame to avoid rotational shortcuts while solving.