Like a Dead Skunk in Your Tire Well, Some Things Just Don’t Go Away - Completely Broken Soma, Part 2 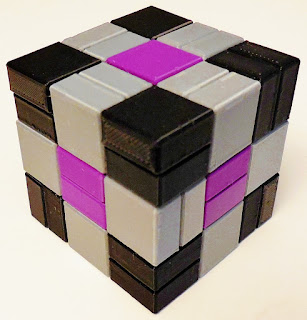 Last summer, I described a wondrous puzzle design dubbed the Completely Broken Soma (A Whole New Level of Puzzle Abuse - Completely Broken Soma).  I ended the post with a request for information on who would be interested in acquiring a copy if it was made available.  With the collection of comments from the post, I approached the cognoscenti of puzzle craftsmanshipdom to prioritize a queue of craftsman interested in the honor of creating this puzzle.  However, not a one indicated the least bit of interest in creating a puzzle that garnered 0 comments in its unveiling post.  I attempted to argue that the lack of response was due to the fact that nobody reads my blog instead of lack of interest in owning a completely broken puzzle.  Unfortunately, I was not unable to convince any of those venerable craftsmen to put their reputation and resources at risk.  On the bright side, there are no readers to be upset by this news.

The smart thing to do is fling the design deep into the pit of eternal stench.  So I bought a 3D printer and attempted to plasticize the design myself.  I went with the 3 color version and created the design files to print the required 54 half-cubes.  The 48mm (1.9”) cube only took a little over 10 hours to print. 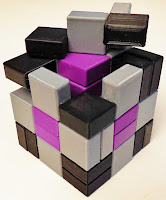 I soon found out that there’s a special place in hell where people can assemble the pieces of the Completely Broken Soma.  The diminutive 8x16x16 mm half-cubes have tiny pimples that need to be popped into the recesses of other half-cubes to connect them.  Forcing these pieces together is a challenge that gets ever more interesting as you add the third and fourth half-cubes while the prior ones get in the way.  However, when you have completed assembling the pieces and then the cube, you are rewarded with a beautiful lumpy cube where the pieces just don’t fit nicely together.  Since the connectors are so small they have a tendency to flex and nice 90 degree joints are not guaranteed (or even likely).

Having suffered a similar fate when creating the wood version, I knew exactly what to do.  I shoved the puzzle in a dehydrator and slowly drove the temperature to just over 130 degrees, the low end of the glass transition temperature for PLA.  I didn’t want to risk going higher and potentially fusing the pieces together.  Shortly after the target temperature was reached, I pulled it out and quickly clamped it for the night.  In the morning, I unclamped a reasonably cubic object and disassembled it to ensure that nothing was unintentionally fused together.  Having finally exorcising that caustic concept from my system, I quickly put it in a box and sent it away to plague someone else.  I really don’t understand why I don’t have friends any more.