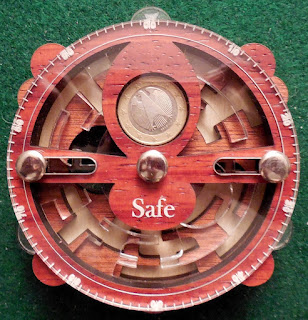 How safe is a coin, really, inside a laser cut maze?  In the case of Safe from Siebenstein-Spiele – not much.  You have several options available to you if you find yourself in dire need of a euro.  There’s the old time-honored smash and grab gambit.  However, it limits replayability of the puzzle.  Then there’s the sneaky take it apart technique where you unscrew the pins and slip out the coin.  Personally, I think this one has some merit.  More on that one at the end.  Lastly, There’s the grind-it-out step-by-step slog through the maze.  Since this is the longest way to get from point A to point B, it’s obviously the puzzler’s path.  If you are not already aware, the goal of every puzzle designer is to provide the longest path possible in the smallest amount of space.

Now that we’ve established that the goal is to remove the trapped euro by traversing the maze, let’s take a closer look at the puzzle.  It’s designed by Jürgen Reiche and made from laser cut wood and acrylic with 3 pins holding it together.  There are 5 layers to the puzzle.  The top layer is made from clear acrylic and has the puzzles name engraved on it as well as 100 equally spaced tic marks around the outer edge.  There are also counts for the tic marks at every even multiple of ten.  The second layer is mostly wide open to view the lower layers with the maze.  However, it does have a circular area that holds the euro in its starting position under the acrylic top.  There are also 4 knobs around the outside to help steady the puzzle as you rotate the maze layers.  Each of the next 2 layers contains a maze.  The top one is acrylic and the bottom one is a dark wood so that you can easily see both.  Each of the maze layers has 2 knobs that stick out to make it easier to rotate the layers.  One knob from each maze layer has an arrow engraved on it.  I didn’t use the arrows, but you can use them with the tics on the top layer to generate a numeric combination for solving the puzzle.  The final layer is made with a light colored wood to make the second layer maze easier to see.  Each maze layer as well as the bottom layer has a circular area that can hold and pass a 1 euro coin. 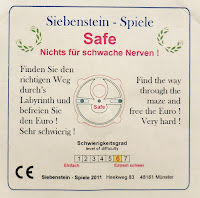 So how does the maze work?  The center pin is fixed and allows the maze layers to be rotated and the two outer pins can move radially in and out between 3 positions.  However they can only move if the 2 maze layers are aligned to both allow the movement.  Also, the maze layers can only rotate if the pins are positioned to allow it.  Traversing the maze is then a series of movements with the 2 outer pins and 2 maze layers.  Once you have that all down, you just need to manipulate the maze so that the 1 euro coin drops down through the layers, one at a time, until it pops out of the bottom.

Returning the euro back to the starting position is almost the reverse of releasing it.  However, letting the coin drop down between the layers is ever so slightly easier than levitating it back up.

Puzzle Master gives this puzzle a rating of 10 out of 10.  I’m assuming that’s for the puzzle’s appearance and not for its difficulty.  As far as laser cut puzzles go, Safe is very attractive.  However, I did not find it “Sehr schwierig !” as indicated in the directions and Puzzle Master's rating.  The maze is rather simple to traverse and I found it more of a fidget toy than an engaging puzzle.  Perfect for something to fiddle with when you’re on the phone, like I did. 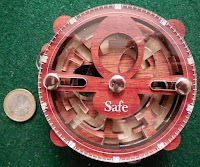 I should mention that there is one point during the solve where you may be tempted to force a move since it is very close to allowing a move, but don’t do it.  Keep going and look for the correct path that requires no force.  Ideally, these “almost valid” situations are worked out in the design phase to remove temptation.  Then again, there does appear to be a market for Youtubing puzzle brutality.

At this point, I have to admit to being a little lazy.  I mentioned at the beginning that it looks like you can take the puzzle apart.  If that’s true, there is nothing to keep you from assembling it differently.  In fact, it looks like you can put it together 32 different ways keeping the order of the layers the same, although I believe that half will have the mirror solution to the other half.  If you’re more industrious than me and have some feedback on whether there are other working configurations, let me know.