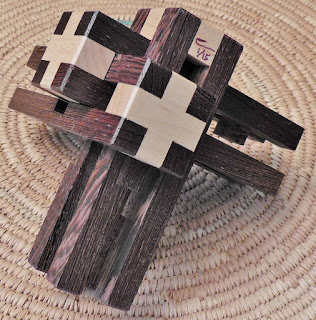 I’ve owned various tripods over the years, but my favorite has never been used to hold anything.  That may sound a bit puzzling at first but it’s Uri Three Bars, made by Cubicdissection and released in January, 2015.  Uri Three Bars was designed by Dario Uri and consists of 3 similar looking pieces that combine to make a tripod structure.  You can also view it with each piece aligned along one of the Cartesian coordinate system axes, which is how I look at it when solving.

Each of the 3 pieces has a Maple base with 4 Wenge square posts protruding from the base.  Several of those posts have 1 or more little blocks glued on them to keep the pieces from being separated.  However, they also have strategically placed notches to allow those little blocks to pass.  Separating those 3 pieces requires determining the order to move the pieces and extract them from each other.  As a disassembly challenge, this is very easy.

As usual, I like to tackle these puzzles as an assembly challenge.  At first glance, it looks intimidating.  Ignoring the little blocks for a moment, there are 32 different ways that 2 pieces can go together and then 32 different ways to add the third piece to each one of those to yield 1024 possible configurations.  However, you aren’t going to ignore those little blocks and with a little bit of inspection and thought, you will find that it is not that difficult to correlate the blocks with the notches to identify the configuration that you need.  The 10-step sequence to add the third piece (or remove the first piece) is not difficult to traverse and you will be quickly rewarded with your very own beautiful tripod sculpture. 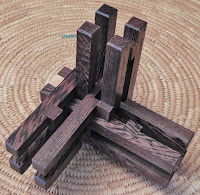 Although this puzzle is very well constructed, I would not leave this one anywhere it could possibly be exposed to any type of accidental physical force.  Did I mention that my 6-year-old grandson lives with me?  Needless to say, this one is not out on display on a regular basis.

If you are interested in obtaining a copy of Uri Three Bars yourself, it is listed on Cubicdissection’s Upcoming Page and may be included in the next release on 11 November, 2020.  Please keep in mind that these releases, like those for Wood Wonders, Pluredro, and Pelikan, are an insane frenzy of probably hundreds of puzzlers world-wide trying to buy tens of copies being released.  Puzzles typically sell out in minutes.  Put it in your cart and check out as fast as possible before it disappears.  The aftermath of this chaos is usually filled with tales of woe from puzzlers that had puzzles disappear from their shopping cart while trying to pay.  If you have to stop and read the description first, you’re doomed!