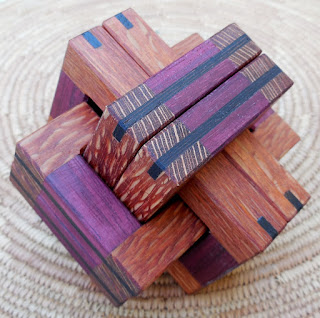 Now here’s a puzzle that you can sink your teeth into and chew on for a few days.  I’ve always found board burrs challenging, and then my buddy Andrew Crowell came along and added a twist.  Or several twists as it turns out.  While other puzzle designers were wondering how to remove rotations from their puzzle solutions, Andrew was wondering how to remove the rectilinear moves.

The first puzzle in Andrew’s new Rotating Interlocking Board (RIB) puzzle line is RIBeye.  The copy that I had an opportunity to play with was beautifully made by Andrew himself from Lacewood, Purpleheart, and Wenge.

At first glance, the RIBeye pieces don’t seem so intimidating.  Of the 6 pieces, there are 2 pairs of identical pieces.  Not only that, but the first pair is the simplest possible board burr piece and the other is the second simplest possible board burr piece.  Wow!  This is going to be a piece of cake!  The remaining 2 pieces are a bit different, but there are ONLY 2 of those.  One of these obviously stands out since it is non-planer and has a piece sticking out to invade his neighbor’s space.  You can argue that RIBeye is not technically a pure board burr, but why waste time on that when you can just enjoy the puzzle.

I always find these puzzles tricky to start.  You need to figure out how the pieces are oriented with respect to each other, which is quite a challenge.  Typically, for me, this entails starting with an initial guess and making changes as I go along and run into dead ends.  The fact that this puzzle requires rotational moves makes it all the more difficult to identify a failed attempt because it could always be possible that I am simply failing to identify a critical rotation.

What kind of clues do the pieces offer to get started?
To the best of my move-counting ability, the level of RIBeye is x.3.15.9.3.  I purposely omitted the number of moves it takes to remove the first piece because it provides a significant clue for this type of puzzle.  Board burr aficionados would probably say, “Oh yea, that’s the classic x move disassemble configuration”.  I avoided searching for the level of difficulty to avoid these types hints even though I am a far cry from aficionado status. 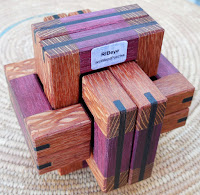 RIBeye took me 2 days to solve.  I started by envisioning how the first piece could be removed from the final assembly and quickly settled on the “x move disassembly configuration” that I thought was being used.  I then set that potential first piece aside and focused on the remaining 5.

The 2 unique pieces could not be paired together, and a lot experimentation revolved around how they could interact with each other.  A lot here means hours.  At the end of the first day, I hadn’t proceeded very far.

Several days later, I started day 2.  Halfway through the day, I decided that I knew how to remove the second piece from the disassembly and put that one aside with the first piece.  Four pieces left to go and the crux of the challenge was still left to be discovered.  At 15 moves to remove the third piece, you can see why it was not particularly obvious.  It may not have  been obvious, but it was spectacular.  It required several rotations and interesting rectilinear moves to accomplish the rotations.  The effort to figure out the sequence for the third piece pretty much encompasses the remaining 2, which means that you are really trying to figure out a 27-move sequence.  Awesome!

The puzzle was really well made and didn’t allow me to cheat any of the moves with unintentional rotations.  However, there were several times where it was almost possible to perform an unintentional rotation, but would have required a little force to accomplish.  This puzzle requires no force and if you have an opportunity to play with it, don’t be tempted to force a move.

If you like board burrs, definitely give RIBeye a try.  Oh, and don't forget to start with it unassembled.
Posted by Zen at 12:00 PM