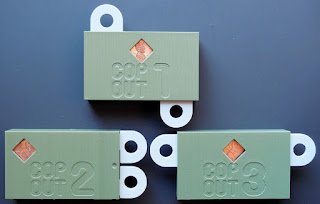 help these people.  Through his Etsy shop, layerbylayerpuzzles, Alan offers fiendish devices that you can use to safely store your pennies.  Alan is so confident in his product that he actually sends them out with an entrapped penny and dares you to remove it.  These devices are called COP OUT 1, COP OUT 2, and maybe you can guess it, COP OUT 3.  All 3 are 3D printed with a dark green box with light grey sliders and sold together as a single set.  I like how Alan priced the puzzles with a nice round dollar figure and then added 3 cents to cover the pennies used.

I don’t normally like blind mazes but the COP OUT puzzles don’t leave you in the dark for too long.  Alan has done an excellent job of engineering each of them so that you don’t have to keep flailing in the dark. 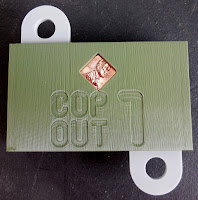 On quick inspection, the case appears pretty solid, there is window with Abe Lincoln peering out, and 2 tabs that look like they can be pulled.  As you’re looking at the penny, it’s obvious that it won’t come out through the window.   However, on the side you can see a slot that is big enough for a penny to escape.  Now all you have to figure out is how to move the penny from the window to the exit.

Given the size of the COP OUT box and the size of the penny, you quickly realize that there is a lot of space that can be exploited to confound the puzzler.  Add to that some moving parts and you have a recipe for a good time.

I don’t think that it’s much of a spoiler to mention that you will need to pull on the tabs.  After all, they arrive with a rubber band on them to keep them from being pulled out and putting the penny in play.  Pulling that first piece sets the penny in motion and the second move makes it disappear like a magic trick!  Now it’s a blind maze and you have to rely on audible clues to determine how you are progressing through the maze.

Eventually, the penny will pop out of the exit.  Yes, even if you randomly pull, flip, shake, spin, and take a hammer to it, the penny will eventually escape.  I dare you not to drop the penny.

The real trick to this puzzle is to figure out how the internal mechanism works so that you can release and reset the penny as efficiently as possible.  If you are like me, the first time that the penny is released, you will be saying to yourself, “how did that happen”.  It took me almost a dozen attempts before I had a solid understanding of what was going on to reliably solve and reset the puzzle.

Unlike COP OUT 1 where it’s easy to get the penny to disappear, It

seems impossible to get the penny to go away in COP OUT 2.  Peering into the window you can get half of an idea of what you need to do.  I tried to take a lockpicking approach to solve this one and wasn’t too successful.  It would occasionally start to jam, but I made sure not to force it and completely jam the penny.  It was then that I realized that a significant clue was provided and with that flash of insight, I solved it immediately.  It’s a brilliant Aha moment.  Once you know how to solve this one, it is very easy to repeat both the solve and the reset.  Unlike COP OUT 1, you know immediately what is going on and you don’t have to do it multiple times to figure out how it works.

COP OUT 3 adds a large helping of confusion, a dash of humor, and a pinch of trickery.  I started this one like the other 2 and immediately got stumped once the penny was out of sight.  To make things more difficult, there are other metallic components rattling within the box along with the penny.  I spent quite a while trying to figure out the internal mechanism as various attempted things appeared to change the movement of the internal components.  The Aha moment on this one is terrific.  Very sneaky.  Never saw it coming.  Like COP OUT 2, once you have it figured out, the solve and reset are easily repeatable.

I could have sat down and solved all 3 at once, but I like to spread them out and did 1 a day for 3 days in a row.  They’re quick solves, but they’re fun, and it’s nice to have a bit of fun for as many days as possible.  I’d recommend that you do the same.