The Bane of All Cubes - Cubane 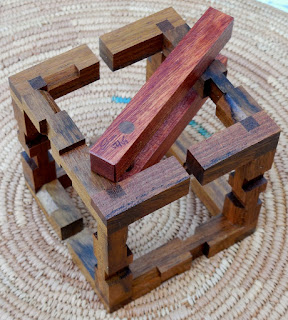 As if the bane of all cubes wasn’t enough, Cubicdissection has announced that they are looking to release Cubane II in the near future pending the development of a successful prototype.  This got me thinking that maybe I should solve Cubane I, or just Cubane as it was called when released, before the second one comes out.

Cubane was designed by Masumi Ohno and released by Cubicdissection in 2015.  It was available in 3 different wood combinations and the one that I have is made with Shedua and Bloodwood.  A version made from Wenge and Padauk was entered in the 2015 Nob Yoshigahara Puzzle Design Competition, although that version was not as well-made as the one from Cubicdissection. 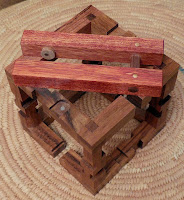 The puzzle consists of two pieces: a frame and a shuttle.  The objective is the remove the shuttle from frame.  There is a well identified starting point that aligns a magnet on the shuttle with a magnet on the frame to keep it in place until you start.  The 2 sides of the shuttle are held together by a dowel on one side, while the other side has a larger dowel that sticks out but does not span the distance between the 2 sides of the shuttle.  The sides of the frame have cuts in them to let the smaller dowel pass through, notches that permit the larger dowel to pass through, and rounded edges that allow the shuttle to be rotated by 90 degrees.  Each edge of the frame supports up to 5 of these mechanisms.  The exit point is easy to identify since it is a combination of a cut and a notch that allows both ends of the shuttle to pass.

With the frame cut in 4 places, you may think that it might be flimsy.  However, Cubicdissection has taken great pains to make solid joints to avoid that from happening.  It would be possible to make a fifth cut, but that may be pushing it. 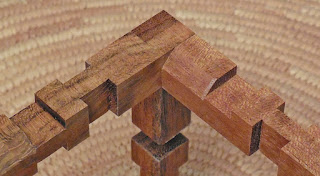 With 12 edges on the frame and 16 ways that the shuttle can reside on each edge, there are 96 possible states that Cubane can be in (+1 for when the shuttle is removed).  Of course, not all states can be reached, making the number of obtainable states smaller.  I didn’t make a state map, but none is really needed and it doesn’t take long to solve.

Is it really the bane of all cubes?  Nah!  But it's really clever and fun to fiddle with.  The first few minutes of the puzzle are the best.  This is where you explore the different ways the shuttle can move and pass between the edges.  I won’t include any spoilers here on the different ways that may occur, but it is very clever.