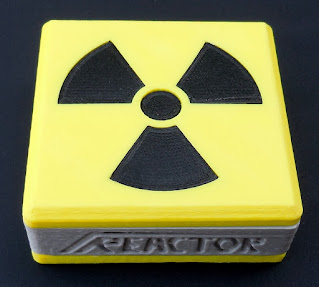 It’s about to go critical! The plutonium rods have been improperly stored, and a radioactive disaster is only moments away! Worse yet, some of the rods have begun to glow red-hot with radioactive decay. You must pack all the rods flush in the container, while balancing the ambient radiation, so that it can be sealed and transported to a nearby containment facility.

This is the message that greets you when you open the Reactor Nuclear Packing Puzzle from CoreMods.  Not only do you need to solve the puzzle, but you need to do it quickly.  No dawdling with those glowing rods.

Reactor is a squat gray box with a solid yellow bottom and a yellow cover with an ionizing radiation trefoil symbol.  Hopefully, your mail carrier won’t open the package for inspection.  The cover just floats on top and although it stays in place once the pieces are correctly inserted, it would be nice if it didn’t move when it was empty as well.

The reactor chamber consists of a 5x5 grid of cylindrical chambers for storing 25 radioactive rods.  All you have to do is pack the supplied 25 radioactive rods into the reactor chambers.  Of course, there are some complicating factors that confound what should be an easy process.  The first is that some of the rods are connected to each other and you have to figure out how to create a 5x5 grid with the 7 aggregated shapes.  The second is that the rods are not all the same length and the chambers are not all the same depth.  Each come in 3 sizes and to make it more difficult, they don’t match in number, so you need to put some shorter rods in deeper chambers.  If that wasn’t enough, there is an unseen element that further impacts potential solutions. 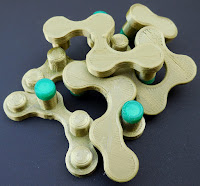 In addition to the original 7 Reactor pieces, there is a second set of 8 pieces that can be packed within the same box.  The second set has a more fluid, rounded look to them compared to the rectangular appearance of the original set.  It looks like the rods have actually started to melt.

So where did I hear about this puzzle and why did I get it?  At the NYPP earlier this year (A Puzzle Party in the Big Apple - NYPP 2020), a good friend mentioned that he was a member of an online puzzle community that I might be interested in.  Later, he emailed me an invitation link that I used to join the Mechanical Puzzles Discord group.  At the time that I am writing this, there are currently 776 members.  This group has many puzzle related channels and discusses pizza, pets, polls, and sometimes even puzzles.  Occasionally, members participate in virtual gatherings that include multiple people working on the same puzzle, usually a puzzle developed by one of the group members.

The last gathering started out as a Reactor party and morphed into a full virtual puzzle party with Reactor as one component of it.  We were lucky to have the Reactor developer, CoreMods, in attendance.  It’s a bonus when the designer is available to provide the background story behind the creation of the puzzle as well as future potential updates and other potential offerings.

I solved both Reactor challenges during the Mechanical Puzzle Discord gathering.  Although CoreMods indicated that the second set was harder, I found it to be the easier of the two.  One other member that had completed both also agreed that he found the second challenge easier as well.  Regardless, neither of the challenges is going to stump anyone for a long period of time.  They are very approachable and can be solved fairly quickly with a little experimentation.

CoreMods indicated that he has 2 other sets of pieces under development that are more difficult than the available 2 sets and provided some overall details on what to expect, which I won’t reveal here.  You’ll just have to wait for them to be released.

CoreMods produces the Reactor Nuclear Packing Puzzle and additional challenges on his 3D printer and you can find them on his CoreMods Etsy Store when they are in stock.