A Tisket A Tasket, Puzzles In – Akaki’s Picnic Baskets 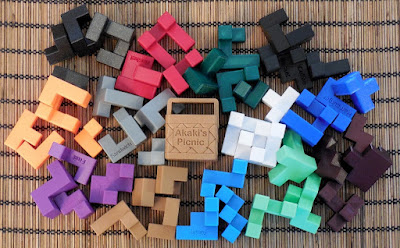 Basket puzzles are all the rage now.  As one Mechanical Puzzles Discord (MPD) member put it, These baskets are like the current beanie babies of the puzzling world.  We had Two Burrs in a Basket by Logan Kleinwaks, 4L Basket and 5L Basket designed by Koichi Miura, 3 Mushroom Basket puzzles designed by Andrey Ustjuzhanin, and now an entire series of Picnic Basket puzzles by Akaki Kuumeri. 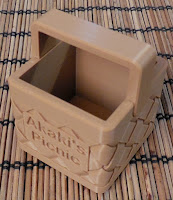 There were originally 10 puzzles in the Picnic Basket series and Akaki offered them for sale on his AkakiKuumeri Etsy Shop.  At the same time, he also kindly made the model files freely available on Thingiverse (Akaki's Picnic (basket packing puzzle series)).  Since then he has added 3 more designs and at least 1 more is currently under development.

The picnic basket puzzle descriptions below are in the order that I printed and solved them.  With almost 3 hours required to print each, there is plenty of time to solve each before the next one is ready.  I printed them directly from the Thingiverse STL files and the fit is perfect.  If you turn the basket upside-down the pieces won’t drop until you lightly tap the basket.  Each model also has a looser fitting option if you find that the pieces are coming out too tight on your 3D printer.  The difficulty levels indicated are those provided by Akaki on Thingiverse or Etsy.

Of course, before printing the first set of pieces, I needed to print the basket.  I have to say that the fancier basket model is very well done and imparts a huge cuteness factor to the series.  Many members of the MPD proudly display pictures of their printed baskets.  Egg Basket consists of 4 pieces that have to be placed in the basket.  I found it to be easy, but it is a good introduction of how the pieces can be manipulated and inserted into the basket.  The 3 rotational moves are staples for the entire series.

Wine Basket seems to be a favorite on the MDP and for good reason.  It’s a bit more of a challenge than Egg and makes great use of the handle to trap pieces.  I particularly liked the piece that consisted to 2 connected 2x2 blocks.  It interacts nicely with the basket and other pieces. This puzzle itself is worth printing out the basket along with the Wine pieces even if for some reason there was something wrong with you and you weren’t interested in the entire series.

Sandwich is a nice example of how pieces have to work with each other.  I didn’t find it that difficult, but it was a nice solve.  The reason I started with Egg, Wine, and Sandwich was the Cubicdissection announcement that these 3 puzzles will be made as a set and included in an upcoming release.  Eric Fuller also indicated on the MPD that the basket for the CD release would be compatible with the puzzle pieces from Akaki’s Etsy shop.  A very nice gesture for those who will want to acquire additional pieces to enlarge the set.  Of course, it would be even nicer to acquire the remaining sets of pieces in different exotic woods.  After having done the entire series, I agree that these 3 make a nice set although I may have been tempted to swap out Egg for one of the more difficult ones, but that’s just my preference.

Unfortunately, I chose to do Subway after Sandwich.  Please avoid doing that.  They are similar and use the same solving method.  The only real difference is that Subway combines 2 of the pieces to make it a 3 piece puzzle.  There is certainly nothing wrong with it, but it was a quick solve for me right after Sandwich.

As a medium puzzle, Coffee Basket is pretty straight-forward.  Nothing really difficult and I didn’t find it as interesting as Egg.  I should mention that I only printed one basket and have been swapping the pieces in and out so there is no real need to skip any of these puzzles when it takes less than 3 hours to print each.  Akaki also provides the option on his Etsy site to buy each puzzle with or without the basket.

Luckily, I had a number of filament colors so that I could print each puzzle in a different color.  Unfortunately, I ended up with some odd things like blue hamburgers.  Hamburger Basket is one of the 3 puzzles added after the first set of 10 on Thingiverse.  Personally, with only 3 pieces and some obvious piece positions, I thought this one was easy.   However, I should add that Hamburger Basket is a favorite on the MPD.

When I mentioned to my Non-Puzzling Significant Other (NPSO), a full-fledged member of the Spouses of Addicted Puzzlers (SOAP) club, that I was only planning to make the difficult and medium puzzles, she said WAIT A MINUTE!.  Witness the power of the cuteness factor!  So I had to change my plan and not only make them all, but print one of the easy ones next.  Enter Fruit Basket.  Not expecting much, I set about putting the pieces in the basket and didn’t find it as easy as some of the more difficult puzzles.  It also added another movement in the basket solving arsenal.  I decided that this one was a bit underrated or at least no simpler than some of the medium level puzzles and decided not to offer it as a starting point for my innocent NPSO.

Chicken is not that difficult and expands on the new move from Fruit Basket.  It also has one more trick up its sleeve to make it interesting.  Just when it looks like it would be trivial, the pieces conspire to get in each other’s way and require you to figure out some additional steps to stuff that chicken in the basket.

Chocolate Basket is a great design.  The only problem that I had with it is that by this time I was familiar with all the moves required and it was a quick solve.

Before now, I’d never heard of Salmiakki.  I assumed that it was some sort of Japanese sushi dish but it turns out that it is a licorice made with salmiak salt.  Who knew?    I found Salmiakki Basket to be tricky and it had me going in circles for a bit.  Just when you think there couldn’t be something new.

Ice Cream is definitely easy and a nice follow-on to cake.  It even introduces a new type of move, which is impressive considering that it was the twelfth one that I’ve done.  The variety of different types of movements is surprising.  Akaki mentioned that his design process consisted of developing a piece with interesting movements/rotations and then subtracting that piece from the cube space to then be further cut up into other interesting pieces.  Of course, given the interaction among the pieces, this description is a very simplistic summary of a more intricate process.

And then there was Vegetable Basket.  I found this easy puzzle to be the most difficult of the bunch.  I’m embarrassed to say that I spent more than an hour trying to solve this one.  Although the move count is not high, there are multiple cube assemblies that can be made with the four pieces requiring you to find the correct one as well as put it in the basket.  I kept doing the same things over and over and ending up with the same assemblies that I couldn’t convince myself would go in the basket.  It was insane and I was becoming so myself.  I was pondering a new name like Basket Case for this puzzle.  Thanks to my NPSO for not letting me miss out on the frustration.  For an easy puzzle, I highly recommend this one. 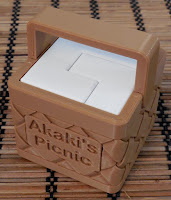 In general, I found the easy puzzles to be a mixed bag with 2 easier than the medium puzzles and 2 harder than the medium puzzles.  The 2 harder ones were so under constrained that they were more difficult to solve.  Unlike some of the difficult ones that were so constrained that they were easy to solve.  I’d certainly be interested in hearing about other people’s experiences with these puzzles in the comments.

Akaki has mentioned on the MPD that he is working on an even more difficult “Boss” puzzle (codename: Peppermint Basket) to cap the series.  Of course, the MPD members have indicated that they don’t want to see the series capped, but continually expanded beyond the “Boss” puzzle.  Other well-known puzzle designers on the MPD, like William Hu, are also considering contributing to the series (codename: Nachos Basket).  I’m looking forward to seeing how this series evolves, especially after seeing some photos involving angled half-cubes.

Finally, a big thank you to Akaki for making the Picnic Basket models available to the puzzle community! 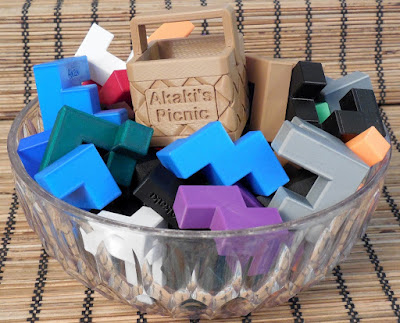