The Proper Way to Solve a Puzzle - PedanTIC 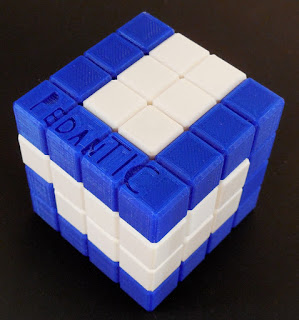 There is a right way and a wrong way to solving a puzzle.  The right way requires that you have an open mind with the ability to explore all possible solution paths.  Of course, puzzle designers know that you’ll go the wrong way and they'll do everything in their power to make that the most attractive path to the point where you can no longer see the correct path.  This was the lesson that I learned during last month’s Andrew Crowell Rotations and Obstructions Series - Turning Interlocking Cubes (ACROSTIC) series challenge: BioTIC (Green Beer ‘ill Cure What Ails Ya - BioTIC). 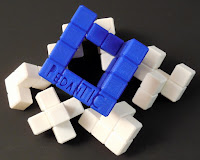 I applied what I learned solving BioTIC to this month’s ACROSTIC challenge: PedanTIC.  It also turns out that PedanTIC shares a lot of similar characteristics with BioTIC.  Although the pieces and moves are different, they share many of the same qualities and the description for BioTIC can almost be copied for PedanTIC - except that I was not caught unaware this time!

What are the similarities?  Like BioTIC, the first 2 pieces of PedanTIC can be pulled from the assembled puzzle in 1 move.  The third piece, however, takes 2 moves instead of 1.  These 3 pieces are mostly space fillers that allow you to figure out where the remaining pieces go.  All the real fun is in placing the remaining pieces where they need to go.  And what fun it is! 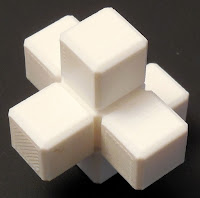 PedanTIC consists of 5 pieces that have to be packed in a frame to form a solid 4x4x4 cube.  As I sat there in quarantine playing with PedanTIC, I started to daydream about those last 2 pieces. The spikey ball piece looks like the SARS-CoV-2 virus and once it’s in the main body of the frame, it moves around without seeming to have a way of being removed.  Another piece acts a receptor for the SARS-CoV-2, which I’ll refer to as ACE2, and as they dance around in the cage, the SARS-CoV-2 virus attaches itself to the ACE2 multiple times.  Of course, once PedanTIC is completely assembled, the SARS-CoV-2 virus is in contact with all the other pieces including the frame.  Yes, we all seem to be a bit preoccupied with the latest Coronavirus - Wash your hands!

After my experience with BioTIC, I was able to solve PedanTIC in fairly short order.  My advice to anyone doing these 2 puzzles it not to do them back-to-back (albeit a month apart) like I did.  Throw a PackTIC or 2 in between.

This is the fourth post of the monthly ACROSTIC series.  You can find the prior posts of the series here: