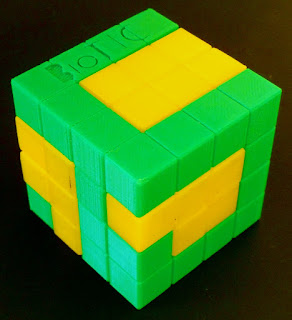 If AntibioTIC is something that cures you, surely BioTIC is a thing that will try to kill you.  I decided to test that.  Using a sophisticated algorithm to choose which Andrew Crowell delicacy to chew on this month, BioTIC was chosen because it’s, ugh, well, it’s green.  Yes, it’s that time of year for all things green, even green beer, with Saint Patrick’s Day coming up on 17 March.  You may also find that a little green beer may take the edge off of working on a little green puzzle.

If you are interested in solving BioTIC without any hints whatsoever, don’t read this post.  You can look at the pictures, but some of the things that I will talk about may help you in solving the puzzle.  I know it would have helped me.

Most of this time was focused on trying to determine where the largest piece went in the puzzle.  There were a couple of spots of interest and then there was the possibility that this piece was just a space filler that trivially pulled out in one move from the constructed puzzle.  I did my best to wish that possibility away and my mind shied away from that to focus on the interesting positions with potential.  Session 1 was a bust and I ended up right where I started - 6 pieces looking for a home in the frame.

Session 2 started with the sad realization that I needed to accept the possibility that the large piece was a space filler.  With that mindset, I was able to find the assembly for the pieces.  Having found the assembly (and yes, I was assuming that there was only 1 assembly), I quickly determined that 3 pieces could be pulled directly out of the puzzle in 1 move each and I just put them aside.  Yes, I was a bit disappointed.  Here’s a hint for you:  Since the pieces are made from 64 cubies, the same number of cubies in a 4x4x4 cube, the first piece is going to come directly out of the puzzle in 1 move.  So, I was expecting at least 1 of those space fillers to be included.  However, 3 was more than I was expecting and 1 was certainly bigger than I was expecting. 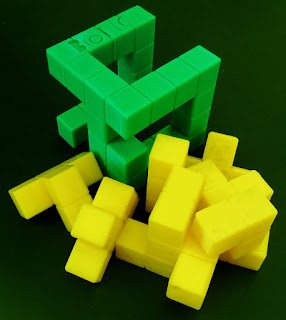 The solution was just reduced to putting 3 pieces in the frame, which would obviously require rotations.  Of course, since this is an Andrew Crowell TIC puzzle, you know it’s not going to be easy.  Naturally, I started with the biggest and most convoluted of the 3 pieces.  This is the part where you should have a green beer handy.  I spent at least an hour trying to get that single piece into the frame where it needed to go with no other pieces in the frame.

Getting the second piece inside the frame where it belonged took some effort, but nothing like the first piece, although the first piece always seems to be in the way.  The third piece was even easier, but not as trivial as the final 3 pieces.  Getting those first 3 pieces in required a lot of rotations and juggling of piece positions.  The process is fantastic!

I could easily say that I didn’t like this puzzle because half the pieces basically fall out of the frame (not in the tight version that I have), but that would be unfair.  Instead of thinking about this puzzle as a 4x4x4 TIC, I suggest that you think about it as a 6-piece packing puzzle with some interesting rotational challenges.  This mindset will get you further in appreciating BioTIC.  You will then appreciate the addition of the trivially removed pieces for the help they provide in discovering the assembly instead of the lack of moves they represent in the solution.  Even for myself, I have a natural bias against burr puzzles that have one or more 1’s at the beginning of their difficulty level, but I really enjoyed the dance of the first 3 BioTIC pieces.

This is the third post of the monthly Andrew Crowell Rotations and Obstructions Series - Turning Interlocking Cubes (ACROSTIC).  You can find the prior posts of the series here: