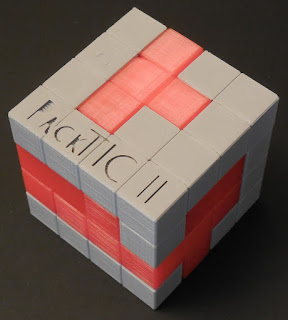 This is the second post of the monthly Andrew Crowell Rotations & Obstructions Series - Turning Interlocking Cubes (ACROSTIC).  In last month’s post (Puzzling DNA - GeneTIC), I described how I lost all self-control and ordered a large quantity of Andrew Crowell TICs.  When I declared that I would solve one every month for a year, Andrew just laughed and wished me luck, knowing full well how difficult it would be for me not to do them all at once.  Month 2 and so far, so good.  The jitters aren’t too bad and I’ve already gotten used to themmm.  Note that, if you make a list of the ACROSTIC puzzles and take the last 3 letters of each, you get TIC, TIC, TIC … - the sound of my clock reminding me how long I have to wait until I can work on the next puzzle.

What makes a puzzle part of the PackTIC series instead of getting its own TIC name?  I really don’t know for sure.  It’s not obvious from looking at the puzzles what characteristic makes them a PackTIC puzzle.  If I had to guess, I’d say it was related to the genetic construction of the design and that they were all created from the same strain of algorithmic inputs. 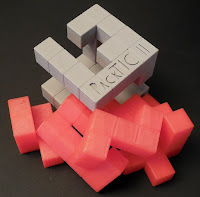 So how does one go about putting one of these together (of course, this assumes that you’ve received it unassembled and haven’t seen how it comes apart).  The first thing I usually look for is some distinctive feature on the frame that will align with only one of the pieces.  Once you get one piece aligned, newly created distinctive features are usually created and the process just repeats itself until all the pieces are aligned - not necessarily inserted.  As you are going through this process, you will be able to insert some of the pieces, while others just have to be imagined in place until you find a way to get them there.   Once you know where all the pieces go, the next step is to figure out how to get them there, which includes determining the order that they need to be inserted.

With PackTIC II, the distinctive feature turned out to be the completely non-distinctive featureless huge opening in the cage.  Now how can that large opening be filled?  The piece that I chose as the best candidate turned out to be correct and the others just fell into place.  Actually, nothing ever just falls into place.  I was just referring to knowing where the pieces needed to go.  I still had to figure out how to get them there.

Most of the pieces were well behaved, but one piece turned out to be a problem child and that’s the one that makes the puzzle worthwhile.  Getting this piece into position requires several rotations and then a few more rotations to support another piece being added.  I find that the best way to determine these rotations, is to image the piece within the frame and then how it would have to be rotated to remove.  It’s perfectly fine to hold the piece next to the frame and rotate it as you thinking through the process.  I do, but you don’t have to hang your tongue out to dry when doing it.

Once you have the correct first 2 pieces within the frame, you are basically done.  The remaining 3 are easily added although the third one does require a simple rotation.

PackTIC II was 3D printed with a gray frame and red pieces.  An interesting property of some of these pieces is that they are semitransparent on some of the sides allowing you to see the internal supports used to construct them.
Posted by Zen at 12:00 PM