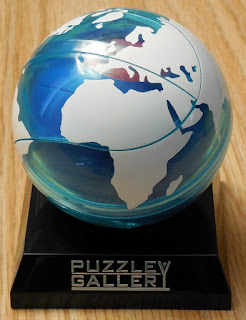 Thousands of casualties in the animal world resulted from the 1969 oil spill off the coast of Santa Barbara.  Earth day was established the following year on April 22nd to raise awareness for environmental reform.  Today marks the 50th anniversary of Earth day, which is now celebrated around the world.

Vesa’s original design was called Tangerine and entered in the 2008 Nob Yoshigahara Puzzle Design Competition, where it won a First Prize award.  Like a tangerine, the internal pieces consisted of wedges that make a complete sphere and there are 4 of them.  The peel of the tangerine wraps around the wedges and is divided into 2 pieces, reminiscent of the outer skin of a baseball.  The skin covers all the segments except for a small hole where you can use the tips of your fingers to rotate the segments within the tangerine.  Once the segments are in the proper position, the tangerine can be opened to free the segments.  However, this is not as easy as it sounds since you can’t see through the peel to see if the pieces are in the correct position.  All you can see are the edges of the segments as they rotate past the access hole.  This requires you to look at the edges and then rotate them while mentally trying to track where they are after they leave the opening.  Of course, all this assumes that you have determined how the segments need to be oriented to open the tangerine. 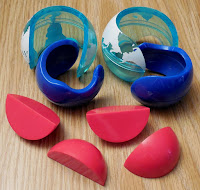 The original version of Tangerine was 3D printed using orange for the peel pieces and white for the segments.  For the Hanayama version, an additional layer was added to the puzzle and renamed Globe Ball using the Earth as the new theme.  The molten core has 4 red segments surrounded by 2 blue oceanic pieces.  The 2 new outer shell pieces are a transparent light blue with opaque white regions depicting the continents.  Now instead of having a single outer shell, there are 2, and the inner shell needs to be manipulated into position with respect to the outer shell.  This has to be accomplished while still manipulating the internal core segments through the hole that is now in both shells.  Another nice feature is the addition of a 3rd outer shell piece that screws into the hole making the globe a complete sphere. 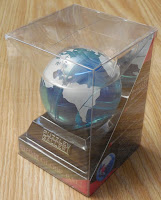 The packaging for Globe Ball deserves some recognition.  The box is a simple transparent box showcasing the puzzle and all the inserts.  Everything is very neatly packaged and the Ball is cradled between 2 clear plastic inserts.  The plastic insert on the bottom covers the official base to display the puzzle.  Another nice feature is that the box not only provides the puzzle designer’s name but has his photo as well.

After solving Globe Ball or the original Tangerine, you can see where the inspiration for Vesa’s newer puzzle, Cast UFO (Uns@lv*bl# F!&#ing O$j@ct - Cast UFO), came from.  You can almost hear him say, I want to do something similar but totally different.  And he did.

Globe Ball is difficult to come by and I’m glad I was able to acquire a copy.  It is not a very difficult puzzle but it is very clever and displays well. 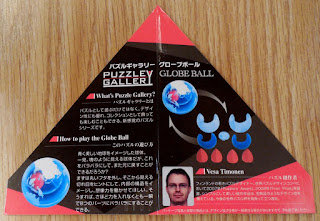