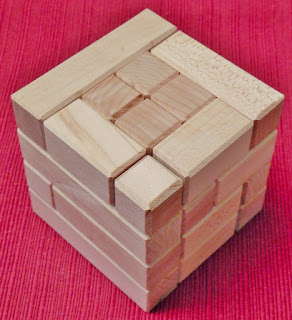 Breaking News - Is Metagrobological Science Broken?  Recent events have questioned the very foundation of the Metragrobology community, leaving many puzzled.  An EnigmaTIC challenge is perplexing the experts.  Assessing the complexity of this conundrum is the conundrum.

Way back, a long, long, time ago, when I was a wee tad, my granddaddy put me on his knee and said “Son” (I don’t know why, but for some reason granddaddies always say son to their grandsons.  I guess it’s one of those economy of expression things even though my granddaddy wasn’t a C programmer).  “Son”, he said, “There are many important things in life you need to know and some are more important than others.  However, the one thing that you mustn’t forget is that if a quantity of cubes forming a completely filled PxQxR rectangular parallelepiped is divided into sets comprised of cubes that form a single contiguous entity, there is a way to divide the sets into 2 non-empty groups such that one group can be separated from the other along a single Cartesian coordinate system vector, if and only if it is possible to separate the pieces from each other”.  I always knew that no matter what else was happening in the world, I would always be comforted by this knowledge.

Now imagine my shock, when a good friend and highly respected metagrobologist declared that “I've found a space filling (all 64 voxels) design that requires more than one move to free the first piece. In fact, it requires several moves.”  Wow! That just shatters the metagrobological foundation that underlies all my puzzle knowledge.  I've come up with ways to do it with non-cubic dissections but not a straight-forward 4x4x4 cubic dissection.

So how did this whole kerfuffle get started?  On several of my Turning Interlocking Cube (TIC) posts, I explained that if there were no voids within the puzzle, the first piece can be pulled out in one move.  Andrew Crowell, the TIC master, thought that this sounded a bit fishy and set out to demonstrate that a cubic dissection puzzle with no voids could be developed requiring multiple moves to free the first piece.

I was saying to myself, “No Way!”, even though this announcement was debuted as a comment on my post where I declared, in a rather PedanTIC manner, that I had learned my lesson and that the correct way to approach a puzzle is with an open mind (see The Correct Way to Solve a Puzzle - PedanTIC).  How could it possibly be done?  I finally decided that it had to use the 4th dimension.  I always have problems envisioning how things look with that 1 additional dimension. 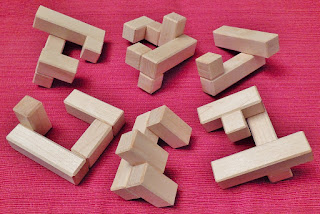 When the pieces were released, I immediately created a set and solved it very quickly.  There are 6 pieces and I used maple to make them.  The puzzle is not difficult to assemble, but the required rotations make it interesting.  When I solved it, it reminded me of Stuart Coffin’s classic, Wookey Hole, although that puzzle is a 5x5x5 cube and has conspicuous voids in the final assembly.

In honor of the ensuing controversy, Andrew named the puzzle EnigmaTIC.  So where did things fall apart and what did Andrew create?  In a prior post, I explained how the complexity of a puzzle is sometimes defined by how many moves it takes to remove the pieces (Puzzle Complexity).  Both BurrTools and Puzzle Will Be Played (PWBP) provide this information for a solution.

The problem was incubated in my lazy description of both puzzle complexity and how it relates to puzzles without voids.  I’m sure that I would be severely reprimanded by my granddaddy if he were still around to set me straight.  I still hide the rulers in the house.  What I should have said was that the complexity was a description of how many moves it takes to remove something from the puzzle, where that something could be a piece or a subset of pieces.  This is the convention used by both BurrTools and PWBP.  There are many instances of puzzles where more than 1 interlocking piece comes out in 1 move like Wookey Hole.  In fact, my very first interlocking puzzle, the Kimiki Cube (In The Beginning – The Kimiki Cube) has 2 pieces that come out together in one move.

My apologies for the carelessness that started this kerfuffle, but we did get a new cool TIC puzzle out of it, so I don’t feel so bad.  Have I mentioned that I didn’t think it is possible to create a really cool 5x5x5 cubic dissection with a minimum 10 pieces that takes at least 25 moves to remove the first piece, or set of pieces, and each piece requires a rotational move to extract.
Posted by Zen at 12:00 PM