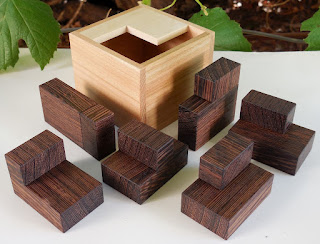 I like puzzles but they aggravate me.  When I’m working on a puzzle, I can’t wait to find the solution.  When I find the solution, I’m disappointed that it’s over.  I expected all these reoccurring conflicting emotions to surface when I pulled (pushed?) Yin Yang out to work on.

Yin Yang was developed by Volker Latussek and made by Pelikan Puzzles.  The box was made using Cherry and has a Maple (Yang) top to contrast nicely with the 6 Wenge (Yin) pieces.  When all the pieces are packed in the box, you end up with a nice digitized taijitu symbol.

Upon inspection, 4 of the Yin pieces are symmetric and the other 2 are not.  These asymmetric pieces are the key Yin and Yang pieces.  I know that I stated that the Wenge pieces were the Yin to the box’s Yang, but even when you separate them, you still have both in each.  Yeah, it doesn’t make a lot of sense, so let’s just agree to call it a principle and keep building on it.   Now that we have our key Yin Yang Yin pieces, as long as they aren't symmetrically situated within the assembly, these mystical keys can be used to affect a transformation between Yin and Yang assemblies.  You’ll also notice that extra effort went into highlighting that each piece was constructed by combining a 2x3 block with a 1x2 block.  I suppose one of those would be the Yin and the other the Yang requiring the key pieces to be formally referred to as the Yin Yang Yin Yang Yin pieces.

Since the Yang box encompasses a 4x4x3 space, the objective is to 1) Find a way to make a 4x4x3 shape with the Yin pieces and 2) discover a method for jamming those Yins into the Yang.  And the answers to all your questions are Yes – Are rotations allowed/required, Are there uncrammable assemblies, If I Yin instead of Yang will the pieces get stuck?

I’m embarrassed to admit it took longer than expected to find a 4x4x3 assembly.  Of course once I found it, it had to be the required assembly and I was never going to let it go.  I could see how the first 3 pieces would come out and only had to figure out how to release the remaining 3.  Surely, taking out (Yang?) / putting in (Yin?) 3 pieces with all that space couldn’t be that hard (With all my experience with 3D apparent packing cubes, it’s a wonder I can still think that).  Needless to say, I spent a considerable amount of time experimenting with some amazing cramming techniques with those obstinate pieces until I remembered the principle of the whole thing and immediately solved it.