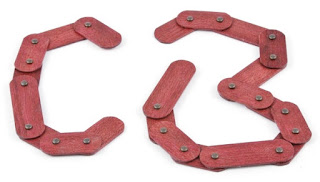 Chico Banan has taken the puzzle community by storm.  His radical political posturing and TD proclivities have made him the most talked about and celebrated individual within the community.  Although he has recently become embroiled in medical supply shortage issues, his true focus has always been on serving the puzzle community.

Chico’s entry in the recent Nob Yoshigahara Puzzle Design Competition was TD345.  This puzzle was the buzz at the competition and it was inevitable that it would be on the tip of everyone’s tongue.

This awesome puzzle was the overwhelming favorite in the competition and garnered the most votes of any puzzle in the competition by far.  In fact, it received so many votes that the vote counter rolled over and mistakenly put TD345 in last place.  Unfortunately, this oversight was not discovered until after the awards ceremony but Chico is looking forward to his trophy.

As with most of Chico’s puzzles, the idea was born out of his tongue depressor advocacy (can you say fetish?).  To commemorate this special event, Chico used exotic tongue depressors made from Purpleheart.   These TDs were linked in two chains of different lengths with the short one making a 3x3, 2-layer square and the other a 4x4, 2-layer square.  After these 2 challenges have been met, both chains can be used together to make a 5x5, 2-layer square.  These escalating challenges provide a challenge for people at any level with a rare few being able to walk around with their chest puffed out proclaiming, “I’m a 5x5’er”.  Needless to say, they’re all squares.

The TD345 prototype used rivets to connect the TDs, but at the last minute, Chico decided to use fasteners to give the puzzle competition participants the opportunity to satisfy their urge to rip them apart.  His thoughtfulness towards frustrated puzzlers knows no bounds.

Chico vehemently denies that his flat articulated chains were influenced by the movie Snakes on a Plane although rumor has it that you could hear the puzzle design competition participants occasionally quoting the movie: “I have had it with these mothaf…ing snakes on this mothaf…ing plane!”

With this puzzle design entry, Chico has finally and definitively proved that the TD complete problem, “Does 32 + 42 equal 52,” is indeed true as most people had come to believe (even Pythagoras!).

When asked what his next project would be, Chico humbly said that his vision is to inspire others to fix the Soma cube.

As a final warning, please do not put the TD345 puzzle in your mouth!  You think that this would have been obvious, but there were several sightings of purple tongues at IPP this year.

Many thanks to the Chico Banan fan club that unknowingly submitted the photos used for this post.