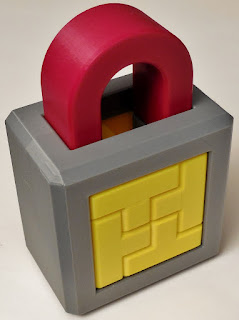 Last week’s blog got me thinking about protection so I thought it might be time to circle back and cover T Lock, the second of Andrew Crowell’s 3D printed burr locks that I recently acquired.  It certainly has secured a well-deserved spot in my collection of enjoyable puzzles.

Like Side Lock (www.zenpuzzler.com/2022/01/put-it-to-side-lock.html), T lock has a main frame (for all you old programmers out there), a shackle, and 4 T pieces that are packed in the frame.  The pieces are nicely 3D printed in gray, red, and yellow.  Since it doesn’t have the fifth piece running side-to-side like Side Lock, I expected it to be slightly easier.  Of course, it turned out to be slightly harder.  T Lock requires 15 moves to remove the first piece compared to 19 moves for Side Lock, but T Lock requires a rotation, which gives it that boost in difficulty.  Recall that puzzle difficulty = cube root of total voxels * pieces * highest piece moves * log(10 + rotations * 100)  / 100.  {Factors to compensate for things like n-ary inflation have been dropped for simplicity.   Compensating factors for piece surface area have also been removed since they are a pain to compute.  However, for designers that needlessly increase voxel resolution, these factors should be added back in.}

I’d like to describe how easy the original disassembly was, but it was so long ago I can’t remember.  This became all too obvious as I worked to get it back together.  In fact, I forgot that a rotation was required, which really is the crux move of this puzzle.  Needless to say, accomplishing the solve was a challenge. The frame has 3 impeding cubies attached inside to help you figure out where you can, or more appropriately, where you can’t, put pieces.  These cubies only permit the shackle to be inserted in one orientation, so you can also add the shackle to places where pieces can’t go.  With some work, you can then determine where the 4 T pieces go, although I admit to doubting this configuration many times and re-examining it.  Trying to get those 4 pieces in the frame took some effort.  Once I finally figured out which 2 pieces needed to go in first, I had a devil of a time trying to get them situated in the frame.

Typical Crowell puzzle scenario – struggling to get 2 small pieces in a big open frame.  Been there many times.  This is where I spent most of the time in the assembly until I finally enjoyed the Aha moment that resulted in not just the first 2 pieces in the frame, but all 4.