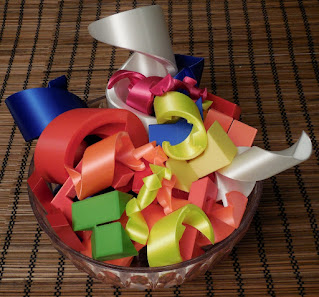 I recently had the opportunity to acquire some nice helical puzzles from one of the Two Brass Monkeys.  I’ve been eyeing these types of puzzles for years and finally acquired some when a set became available on Puzzle Paradise.  Included in the set were: HeLLical Burr, Oliver Twist, Twiddle Dee, Twiddle Dum, and Dodekastar (improved).  The first 4 were designed by Derek Bosch and are from his line of helical burrs, which he has been expanding over many years.  Although Dodekastar is not a helical burr, it is a great puzzle designed by Yavuz Demirhan and tweaked by the Two Brass Monkeys to be more difficult.  A nice little additional fidget puzzle was also included, which was the only puzzle to arrive already disassembled.

Puzzles arriving in their solved state is a sin and need to be disassembled into purgatory before being redeemed into a solved state.  Although a sinful puzzle and one that has been redeemed share the same outward appearance, deep down, you know the difference.  Every serious puzzle collector is able to scan their collection and weigh their sins against redemption.

Having received this batch of sinful puzzles, I quickly (or not so quickly) banished the puzzles to purgatory (a nice looking decorative bowl) for all eternity (the average amount of time it takes me to get around to solving puzzles).  Most were straight-forward, but one of the Twiddle twins (I really don’t know which is which), was a bit of a challenge.  I was also surprised to find out that Dodekastar was a challenge to take apart as well.  A lot of movement, but no obvious exit point.

Stay tuned for further updates on these puzzles as they are redeemed and take on their divine forms.