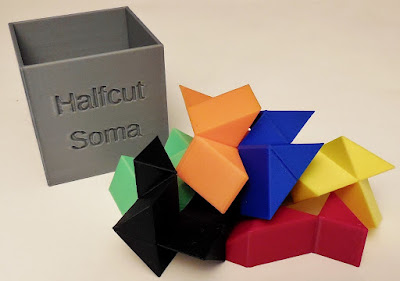 After seeing all the abused, mangled, and broken Soma variants that came out, László Molnár came to the conclusion that 90/90 is so 2020.  Using his acute sense of puzzle design mastery, he determined that something was wrong with the angles of these variants and decided that they couldn’t be right all the time.  Utilizing the rombic tetrahedra grid of BurrTools, he found a cut that was above the rest and created Halfcut Soma - once again proving the adage that you can still appear sharp even if you’re not right.

Like so many unfortunate Soma cube victims before, the design process commenced with picking on the smallest piece of the group.  The tri-cube was once again targeted and dissected into 6 pieces.  This time however, László cut the 3 cubes at 45 degrees before gluing each triangular half-cube to one of the other 6 pieces.  This could have been the end of it, but László obviously decided that this puzzle would be too easily solved by discriminating Soma puzzle enthusiasts who have been crunching through many variants over recent years.

Continuing on his 45 degree tangent, László decided to cut all of the pieces’ cubes at 45 degrees and throw half away.  Now each piece was made with only 5 triangular half-cubes.  Of course, now you can’t immediately identify which half-cube was the one that was added.  Each piece looks like it could have been derived from more than one of the original Soma pieces.

The objective of the puzzle remains to fit the pieces into a 3x3x3 space.  Of course, with all those half-cubes thrown out, there are a lot of holes in the resultant cubic space.  László also ensured that there was a single solution to maximize your enjoyment.

Solving the Halfcut Soma is a nice challenge!  Enough information is provided for you to solve it with a logical approach and a little experimentation.  Even so, it takes a while to warp your mind for working with pieces made with triangular segments instead of cubes.  Taking a logical approach is not mandatory and you’re welcome to disregard it and enjoy the puzzle for a longer time. 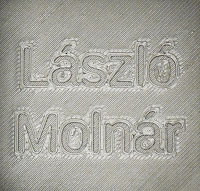