In The Beginning – The Kimiki Cube

A long, Long, LONG time ago, a little boy took a school field trip to the Museum of Natural History in New York City.  This was a wonderful experience for the little boy who had never been to NYC before and certainly not that far from home without his parents.  Even better, he had 2 dollars in his pocket that his mother had given him that morning to buy something that might catch his interest.

As magical as the museum exhibits were, the little boy was amazed at all the wonderful items on display within the museum gift shop.  Amongst all the fantastical scientific displays, ferocious looking dinosaur figurines, and astronomical paraphernalia, he found himself transfixed by a simple cube, which became his grand purchase. 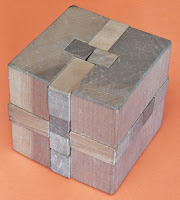 The cube was obviously made of wood and appeared to be comprised of multiple pieces that interlocked together.  It was even stamped with “JAPAN” on it, which even the little boy knew was all the way on the other side of the world.

After cajoling the first couple of pieces apart, the entire cube disassembled into 12 pieces.  Excited, the little boy ran to show his mother the 12 pieces and explained that she needed to put it back together, which she did.  Little boys don’t like to ask mothers for help and he made sure to never do that again.  His mother is still fearful when he approaches with a puzzle in hand.

He was now on the path.  This puzzle and the many that came afterward, warped the little boy's mind and he had no other recourse than to become an engineer.

More than 1000 puzzles later, this first puzzle, the Kimiki Cube, is referred to as Ground Zero.