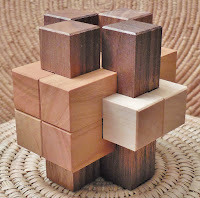 Today is the first day of the new year and I hope that you have all resolved to do more puzzling this year.  With any luck, you have received many new brain twisters over the holidays to get you started for 2020.

The subject of this first post of the new year is named Happy New Year and designed by Johan van de Konijnenberg.  It has a unique level 16.2.4.3.4 solution and was released by Cubicdissection in July 2013.  Wow! That was more than 6 years ago and should give you some insight into the appalling state of my puzzle backlog.

With the New Year deadline looming, I took it apart, let the pieces sit idle for a while, reassembled it, and wrote the post all in plenty of time.  After the euphoria of finishing so far ahead of the deadline wore off, I realized that I had the wrong puzzle.  As it turns out, I had just worked on Sweet Sixteen.  You really can’t blame me for mistaking one for the other.  Although the solutions are very different, they are both high-level burr puzzles released by Cubicdissection in July 2013, they both use the same 3 types of woods, the pieces are the same size with the same finish, they have nearly the same number of pieces (11 vs 10), and they both require 16 moves to take out the first piece.

Armed with the correct puzzle and a diminishing span of time to the deadline, I started disassembling Happy New Year.  The puzzle is not difficult to take apart but I was surprised that it didn’t start falling apart after the first 4 pieces were removed.  The remaining 6 pieces hold together quit well and come apart in an interesting manner.  Once it was all apart, I scrambled the pieces and left them alone for a while before tackling the assembly on another day.

The assembly was very interesting and followed a logical progression.  The piece locations can be determined without too much difficulty, making the crux of the assembly determining how to get the pieces where they belong.  It turned out that it was fairly easy to get 8 of the pieces together, with only 2 remaining to be added.  Of course, it turned out that the remaining 2 pieces were not the last 2 pieces that needed to be added.  They were part of the stable 6-piece core, which made holding all those pieces a fiddly balancing act without them.  I was able to disassemble the 8 pieces until I only had 4 remaining and could see how to add the 2 pieces to make the 6-piece core.  Adding the remaining pieces was relatively simple after that.

As you would expect from Cubicdissection, Happy New Year is well made and the tolerances allow the pieces to be easily moved.  The puzzle is very attractive and made from Maple (2 pieces), Cherry (4 pieces), and Walnut (4 pieces).  The pieces have a very small bevel on the ends and none along the length of the pieces.

This was a great design, and I thought that the 6-piece core made it really interesting to solve.  The use of the 3 types of woods keeps the level of difficulty from getting too difficult and allows the piece locations to be determined without a lot of effort.  If you’re interested in higher level burrs than the 6-piece burrs, this would be a good one to try.
Posted by Zen at 12:00 PM