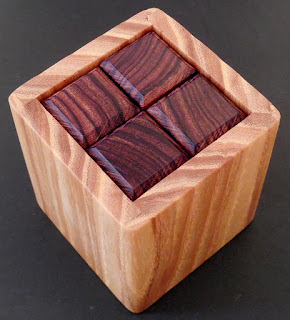 One of my favorite puzzle designers from the other side of the pond is Stéphane Chomine.  I own quite a few puzzles designed by Stéphane but nothing close to the 648 designs (as I write this, but it increases every few days) that he has on Puzzle Will Be Played.  This particular post is about Stéphane’s puzzle, 4 In Frame.  It is #40 on Stéphane’s Puzzle Will Be Played page and was added on 3 January 2011.

I bought this puzzle from Wood Wonders in August 2017.  It was beautifully made by Brian Menold with an Ash frame and Kingwood pieces.  I really like the look of Kingwood and the end grain is spectacular.  It also contrasts nicely with the Ash.  The first thing that I did when I received it was to take it apart and then summarily forget about it.  Over the past couple of years, I’ve pulled it out for a few sessions but never managed to solve it.  Recently noticing that the puzzle was blocking the dust from settling on the china cabinet shelf, I decided that it was finally time to do something about it. 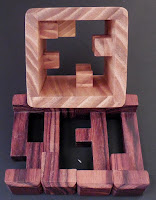 There’s only 4 pieces that have to go in the frame, so how difficult can it be.  Like most puzzles of this type, there are those pesky blocks that are glued to the inside of the frame to frustrate the movement of the pieces.  With a difficulty level of 20.14.9.3, that’s a total of 46 moves to get the pieces in or out of the frame.  That’s a sizeable number of moves considering that there are only 4 pieces.  This puzzle doesn’t give up easily.  When taking it apart, even when it is half empty with only 2 pieces left, it still takes 9 moves to take the next one out.

According to Puzzle Will Be Played, there are 8350 assemblies and only 1 solution.  What this means is that the there are 8350 ways that the 4 pieces can be situated in the puzzle looking like the final solution, BUT only 1 of those ways can actually be realized.  I’m glad that I didn’t look up these statistics before solving the puzzle but it was obvious that those meddling blocks within the frame weren’t prohibiting any potential final resting places for the pieces - another way of saying this is that there were no easy hints as to where pieces couldn’t go.  Oh, and with 8350 assemblies, a brute force attack is not the way to go! 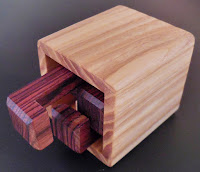 Having failed to solve this puzzle a couple to times in the past, I didn’t have much hope of knocking this one out quickly.  However, I was surprised to find that I was able to assemble it within a couple of hours.  For this attempt, I felt like I had, “the knack”, an innate sense of ethereal metagrobology channeling through my corporeal body.  It’s also possible that I had a bit of a head cold but it’s sometimes difficult to distinguish between these things.

I was able to look at the frame and identify where one of the pieces had to go.  From there I was able to identify where the next piece had to go and how it interacted with the first piece.  Once It was completely assembled, I marveled at the moves required to get there and aside from a couple of backtracking steps, I was amazed at how accurate I was in my assumptions.  Of course, it’s always possible that my brain was leveraging those prior failed attempts under all those cobwebs throughout the dusty gray matter.

4 In Frame is a great puzzle and I recommend it for burr puzzle collectors.  If you’re new to these types of puzzles, you may want to try a less difficult puzzle first.
Posted by Zen at 12:00 PM