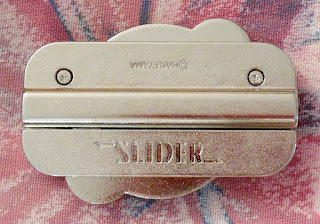 My regular Hanayama pusher inquired if I wanted a copy of Cast Slider and I declined.    I felt that a puzzle with 3 stars from Hanayama would not provide enough of a challenge to be that interesting.  I’ve made it a point to collect all the Hanayama puzzles that are 4 stars and higher.  It’s not that I don’t own any easier Hanayama cast puzzles.  I have a copy of Cast Loop, which is 1 star.  It may not be difficult, but I like the movement and it’s a good puzzle to hand to a new puzzler.

My first Hanayama puzzle was Cast Enigma (6 stars), which started me on this path.  As I get older, the numbers seem to be skewing to the left.  I’m thinking that maybe I should reevaluate my abilities and collect puzzles that are 3 stars and higher.  Anyone that has been beaten up by Cast UFO (4 stars) recently can certainly sympathize.

When recently purchasing some puzzles from Puzzle Master to support a puzzle challenge (Puzzle-A-Month Challenge), I decided to add Cast Slider to the cart and give it a try.  I took it with me to the barber and solved it while waiting to get my hair cut.

Cast Slider was designed by Vesa Timonen and consists of 3 pieces, the 2 sliders and a central hub piece that they slide on.  Each slider consists of two flat sides that are connected on each end by a large pin.  One side is extended with a grove that the hub’s pin runs along.  The hub’s pin extends out of both sides of the hub to interact with each slider.  The hub also has a slots cut in it to allow the slider’s pin’s to travel along it.

Here is a blow by blow description of the heart-pounding disassembly process, slightly redacted to preserve against spoilage.   Of course, the person responsible for the redaction is ██████████. 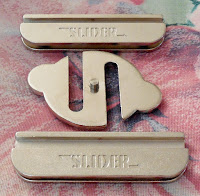 As you can see from the solution description, this puzzle is not that difficult but has some interesting moves.  Assembling the puzzle would be more of a challenge than disassembly if you haven’t gone through the disassembly process.  However, I consider Slider a disassembly puzzle and wouldn’t recommend starting with the assembly.  I was able to do this puzzle in a few minutes, but I have handed it to others who have found it more challenging than I did.

If you are interested in getting your own copy, you can get Cast Slider from Puzzle Master here.  If you get stuck, just follow the directions in the solution above.

P.S. I gave the puzzle to my wife to work on after she read the solution above and she's still not talking to me.  Great puzzle!