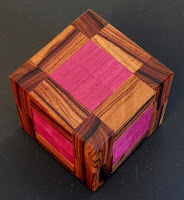 Antigravity, EM wave theory, and centrifugal force computations were just some of the techniques I employed to solve this beautiful little puzzle, but don’t let her looks fool you, she’s a beast!  You can’t see what’s going on in her head and that’s the problem.  It’s a blind solving process.  However, it’s obvious that she has some loose marbles rolling around in her head.

Before Andrew Crowell started providing those wonderful TIC designs for the puzzle community, he developed a few other puzzle series based on the 4x4x4 cubic dissection.  Normally with a 4x4x4 cubic dissection, you have up to 64 cubes (4 layers of 4x4 cubes) where the puzzle design specifies which cubes are removed and which of the remaining cubes are glued to each other.  Not satisfied with this Andrew decided that some of the internal cubes should be round and replaced them with marbles.  This helps the internal pieces move without getting stuck.  You will appreciate this, until you don’t, and then you’ll be cursing it.  Now take this nice puzzle that I just described and add one more additional feature and she becomes the frustrating hair-pulling demoness called Split Cube 2.  Keep in mind that none of the features of this puzzle are meant to help you, they are ALL designed to hurt you.  Andrew mentioned to me that he was tempted to call this series Just Plain Mean.

I have to confess that before I met up with Andrew’s puzzles, I had no desire to spend time on a “blind” solution process.  However, I really love these puzzles and found them quite challenging as well as enjoyable. 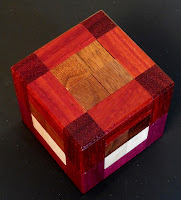 I received Split Cube 2 from Andrew as a prototype that he wanted feedback on.  Andrew’s comment to me was: My goal was to make very tough/frustrating puzzles, because a few people asked for something more difficult, but these might be too tough to be enjoyable ...  I assuaged Andrew’s fears by informing him that these are the types of puzzles that the puzzle community eats for breakfast.  There’s a lot of fiber in wood.

What Andrew calls a prototype, is what I aspire to make someday.  The prototype is beautifully made with Purpleheart, Padauk, Walnut, and Maple.  When I was done, I liked Split Cube 2 so much that I got a second copy in the final wood selections of Tigerwood and Purpleheart rather than give the prototype up.  Both copies have the edges of the cube beveled but the edges of the individual pieces are not beveled, which looks fantastic on this puzzle and provides no clues as to which cubes are connected to each other. 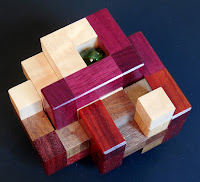 As part of the review process, I timed myself to provide the first benchmark on how long it takes to solve.  It took me 1 hour and 45 minutes to completely disassemble the puzzle.  If you would like that broken down into stages: it took 1 hour and 40 minutes to get the first marble out and 5 minutes to completely take her apart.  With puzzle boxes, you know you are done with the solution when you find the designer’s Hanko (stamped signature).  It would be nice if future versions of this puzzle revealed the Hanko when the last 2 pieces are separated to let you know you are done.

This is a difficult puzzle and normally I wouldn’t have solved it that fast.  There were 2 things working in my favor.  The first is that I was timing myself and therefore very focused and moving faster than normal.  The second is that I had already solved Split Cube 1 as well as the 4 Exolution puzzles, that gave me some idea of what to expect in this puzzle.  Most of the time is spent experimenting with the cube to get some kind of feedback that helps generate a mental map of the internals and how the framing pieces are constructed.  With the mental map, you can hypothesize how she would come apart and the moves required to accomplish it.  And finally, you test the hypothesis to find out it doesn’t work and start all over again, and again, and again…

I like Split Cube 2 because she’s Just Plain Mean.  This puzzle has teeth and once you get her apart, you will see exactly where the teeth (OK, tooth) are and you can put it back together without this tooth to make it a very attractive and fun beginner level puzzle.  If you want to challenge somebody, you can leave it in.

So here is my confession.  Yes, I can get her open and I can even do it relatively quickly.  However, my solving process for this particular puzzle is extremely unusual and I’ve failed to come up with a straight-forward method for solving it.  If you find one, I’d be interested in hearing about it.

I highly recommend this puzzle and if you are up for a challenge, you should get one.  Cubicdissection is currently planning on releasing a run of these in the near future. 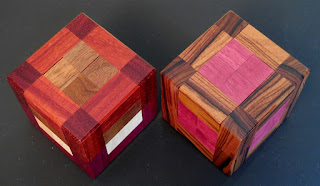