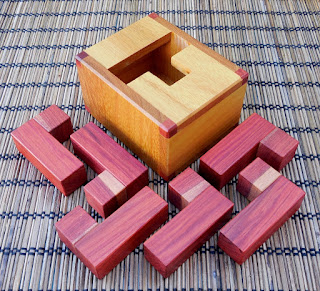 A hat trick in sports is a reference to 3 of something.  When I was a kid, my folks used to watch hockey, so I was brought up to recognize a hat trick as 3 goals scored by a player in a game.  Other sports have similar definitions of a hat trick.  I’m sticking with hockey since Hat Trick, the puzzle, obviously has 6 hockey sticks (one for each player on a hockey team) with a goal - of packing them all in the restricted opening box.

Hat trick was designed by Laszlo Molnar and entered in the IPP39 Nob Yoshigahara Puzzle Design Competition where it was one of the top 10 vote getters.  When the competition entries were originally announced, I was intrigued by this puzzle and attempted to solve this puzzle as a mental exercise without having a physical copy.  I finally encountered a copy at the Rochester Puzzle Picnic (A Decade of Puzzling - RPP 2019).  Brian Menold from Wood Wonders brought several copies to RPP in a variety of different woods.  They were so beautiful, I ended up taking one with an Orange Agate box and Redheart pieces home with me.  I particularly like the look of the Redheart corners on the Orange Agate box.

So, what is Hat Trick all about?  It consists 6 hockey sticks or if you prefer, you can just think of them as L shaped pieces that are 3x2x1.  These hockey sticks can be stored in the accompanying box that has an interior space of 2x3x4.  The only problem is that someone made the opening in the storage box too small to simply dump the hockey sticks in.  It only has a small T-shaped opening in the top.  This type of faulty craftsmanship turns an easy job into a complex process, or what we fondly call: a puzzle. 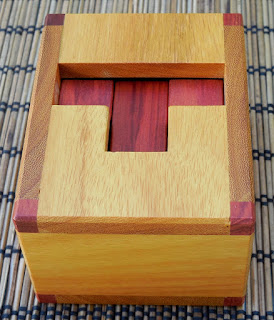 Once I had a physical copy, I was able to verify the solution that I had envisioned when viewing the puzzle competition design entry listing.  The solving process for this puzzle is fairly straight-forward.  Since this is a fully packed restricted opening box with 6 identical pieces, it is obvious where the last piece in (or first piece out) is located.  With that information, there aren’t too many 2x3x4 assemblies left to check.  It becomes obvious early on that rotations are required to insert and manipulate the pieces.  Understanding the possible rotations that can be made is the key to achieving the required assembly.

Compared to other recent packing puzzle designs, I found this one to be on the easier side.  It would make a nice challenge for a new puzzler.  The key movement required to orient the pieces is clever and provides a very nice Aha moment.

Hat Trick is currently sold out on Wood Wonders but it’s possible that it may show up again.
Posted by Zen at 12:00 PM