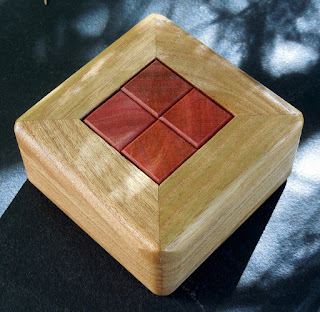 Puzzles are a concoction of many things, and there are 2 things that when combined always excite me.  They are Stéphane Chomine and Brian Menold.  Combining these 2 always results in a winning combination.  They are great by themselves and even greater together.

This was once again confirmed with Quadripole from Wood Wonders.  It was designed by Stéphane in 2012 and made by Brian in 2018.  It is a level 22.9.3.2 puzzle consisting of 4 pieces captured within a frame.  The objective is to remove the pieces and then reassemble them back into the frame.  The puzzle is beautiful with Pink Ivory pieces and a Catalpa frame.

There are several things that I like about the design.  The first is the simplicity of the frame.  There are no additional fixed cubes blocking movement within the frame.  It is the same on all sides, so the orientation of the pieces to the frame doesn’t make a difference.  I consider this more elegant than frames that have internal obstructions added to increase the level of difficulty.  I also like how the puzzle only has 4 pieces that get inserted within the frame.  It makes it seem innocuous with only 4 pieces (some puzzlers never learn).

Some of you may be saying to yourself: that puzzle was released by Wood Wonders a year ago, why is he blogging about it now?  There are several reasons for that and here is the short version of that story.  After ordering the puzzle, it joined the backlog of puzzles to be solved.  I have 2 types of puzzles in my collection: those that have been solved and those that have yet to be solved.  Both sides of my collection seem to be expanding.

Shortly after receiving the puzzle, Brian sent out an email indicating that one of the pieces may be missing a cube and if it was, he would send a replacement.  Very kind of Brian to offer to make the puzzle potentially more difficult than it already is.  This is why I like dealing with people like Brian.  Not only do you get quality workmanship, but he stands behind his work.  This prompted me to take the pieces out and examine them and sure enough, I was missing that extra cube.

After receiving the updated piece, the unassembled puzzle sat on a shelf in the dinning room for several months.  This is not unusual in our home since I like to disassemble puzzles and let them sit for a month or 2 (or 3 or 4 or 5 or … you get the picture) to provide enough time to forget anything that I may have learned from the disassembly process.  For Quadripole, I successfully remembered nothing! 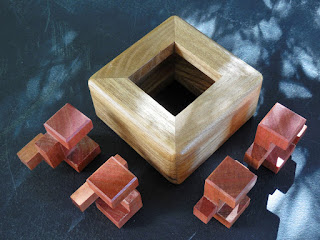 After enough brain cells died off, I sat down for several hours on several occasions attempting to get this puzzle back together.  Normally, when working with the pieces, I get a sense of how they interact with each other and can put those working relationships together to form a solution.  For instance, one of the pieces could only exist within the frame with 2 orientations, so there were only two sets of potential solutions to search through.

Unfortunately, I was unable to uncover the solution by examining the piece relationships and had to resort to a brute force look at all possible piece position/orientation combinations.  While doing this, I discovered some potential relationships that I have not noticed before and soon had the pieces back in the frame.  Solved!

But wait a minute!  It felt like one the moves that I used near the end, may have required a little tilting motion to insert the final piece.  It was so minor that I checked it several times to convince myself that it was indeed a rotation.  I didn’t remember seeing any reference to a rotation and checked the box that the puzzle came in.  The nice thing about this box is that Brian included a label with a picture of the puzzle along with a description.  Sure enough, no reference to a rotation.  I also noticed that the label indicated that it takes 22 moves to remove the first piece and I didn’t feel that it took me that many moves.  Sure enough, I checked my solution and not only did it have a rotation, but it only took 14 moves to remove the first piece.

It turns out that I stumbled upon the secret 2nd solution only encountered by the mystic puzzlers of …. After I finished daydreaming, I plugged the puzzle into BurrTools to verify the stated 22.9.3.3 difficulty, and sure enough, it was quickly validated.

In the end, it looks like there are 2 solutions to Quadripole; a level 22 rectilinear solution and level 14 rotational solution.  I would have preferred that there wasn’t a second solution, but to be honest, I was in need of some level of accomplishment when I stumbled upon the rotational solution.

Thanks again to Stéphane and Brian for another fine masterpiece! 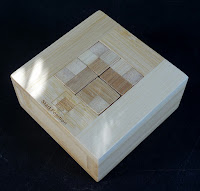 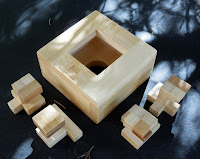 After putting Quadripole back together, I felt compelled to pull the Beta Funzzle puzzle out of the to-do pile since various references have indicated that Beta, designed by Mr. Y Gong, is similar to Quadripole.  Puzzle Master, the exclusive distributor of Beta, indicates that it is a variant of Quadripole on their website.

Funzzle Beta is made from Bamboo and is attractive enough.  Puzzle Master rates it at a level 10, which is highest on their level of difficulty and well deserved.

So how do the designs for Quadripole and Beta compare?

Frame – Quadripole has a frame that is open on top and bottom and pieces can move in and out of both sides.  Beta uses a box with only the top open for pieces to move in and out although it includes a hole in the bottom to help manipulate the pieces.  The box also includes a couple of internal obstructions and some half block notching on the lip trading off elegance for additional complexity.  I did like how the top of the box had an engraving of the piece locations although there are so many moves for assembly/disassembly, it may not be that useful.

Pieces -  The Quadipole pieces are of length 4 and the Beta pieces are of length 3 although they utilize half cubes and notches, so you could say they are of length 6.  To be honest, if I hadn’t heard that one was a variant of the other, I wouldn’t have noticed a similarity.  Even after comparing the pieces, they seem dissimilar enough to me.

Overall Design – I found the Quadripole design attractive due to the elegance of its design and at level 22, I believe that it is approachable to a large segment of the puzzle community.  Beta on the other hand trades elegance for complexity, but Oh what an amazing dance it provides.  At level 43, it may be out of the reach of many but well worth watching in Burr Tools.

I can’t recommend the mass marketed Beta puzzle because this Funzzle was not fun.  The pieces were fiddly and attempting to move them around was just frustrating.  I quickly gave up trying to solve the puzzle and entered the puzzle in BurrTools.  Even following the steps with BurrTools was frustrating with the quality of the pieces.  However, if a nicely working version ever becomes available, it may be well worth acquiring.

You can read about Kevin’s take on Beta here and Gabriels impression here. 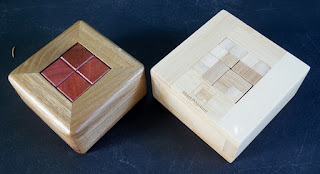