There I was, minding my own business at the IPP34 banquet, when Neil Hutchison plunked down a puzzle in front of me.  It was a beautifully made 6 piece packing puzzle with box and a felt marker.  It was rather large and decorated with multiple signatures.  Neil had the brilliant idea of making a puzzle to bring to IPP for puzzlers to solve and sign as a nice keepsake from the event.  At least that was the objective.  In my case, it was signed without solving. 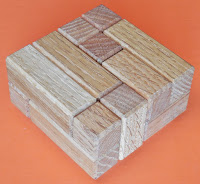 The puzzle was Eric Fuller’s Pack 6.  It consists of 6 pieces that can be packed into a 4x4x2 shape.  Attentive readers may ascertain how the puzzle’s name was derived.  Although this is not a very difficult puzzle, there is only one solution and it may cause some blameless individuals more than a few minutes to solve while under stressful scrutiny.

I never had an interest in Pack 6 until it embarrassed me that night at the banquet.  Upon returning home from IPP, I immediately made a set of pieces from ¾” red oak stick stock from the local home improvement store to attack the problem again.  I started to analyze the puzzle and determine how the pieces should be oriented to provide 16 cubes on each of the 2 layers but eventually decideded that it would be just as quick to determine how a few key pieces could be oriented within the solved state.  Soon thereafter, I had a nice 4x4x2 shape. 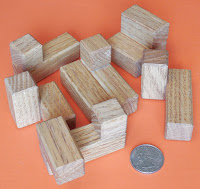 With over 1000 finely crafted puzzles in my collection, Pack 6 is the one that adorns my kitchen table.  Why is that?  Because it is the go to puzzle for my little grandson to play with.  It may not be fancy, but it’s fairly robust for the solving techniques of a 3, now 4, year old.  My goal is to expose my grandchildren to puzzles that they can handle and mentally process as they get older.  So far, Pack 6 has been a skyscraper, a bridge, and even a truck.  Someday it will be a 4x4x2 block.

Eric made the original Craftsman run of Pack 6 in June 2003 and a second run in December 2006.  If you are interested in getting your own copy of the puzzle, Eric sells them on his Cubicdissection Artisan Puzzles page.
Posted by Zen at 12:00 PM