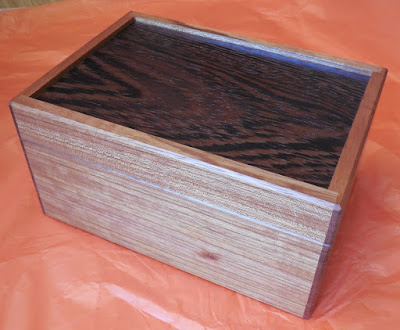 When is a puzzle set a better puzzle set.  When it has more puzzles of course!  This was the goal of the Penultimate Burr Box Set in Cubicdissection’s latest offering by master craftsman Eric Fuller.

Eric just gave notice that he is entering the next stage of Cubicdissection’s evolution by discontinuing the GEM series and most of the Artisan series to focus on the high-end Signature series of puzzles.  This news was punctuated with the release of several stunning puzzles, the king of which was the Penultimate Burr Box Set. 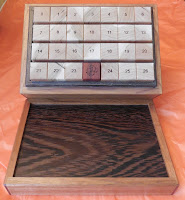 The Penultimate Burr Box Set was provided in 4 different types of wood combinations with a total of 74 being offered.  They quickly sold out and those lucky enough to acquire one will not be disappointed.  Mine has a Quatersawn Curl Jatoba box with Wenge top and Figured Walnut bottom, Ash pieces, and a Padauk logo.  It’s absolutely stunning and obvious that Eric was looking to make a big statement with this collectible piece.

What I really like about Eric’s approach to selecting and producing puzzles is that he thinks outside the box, or in this case, thinks outside the box inside the box.  Since there were 27 pieces, I assumed that the box would have 3 rows of 9 pieces each.  I was pleasantly surprised to see that it had a nicer shape consisting of 4 rows of 7 pieces each with the Cubicdissection logo in the center of the bottom row in contrasting wood.

But where are the instruction?  Did I mention what a phenomenal undertaking this effort was?  Did you notice the word Penultimate in the name?  If you were assuming that Penultimate only referred to the large number of puzzles you can construct, you’d be wrong.  Eric wasn’t satisfied with simply making a nice box holding 27 pieces, he wanted more, much more.  In addition to the beautiful set, he added one more hidden touch – It’s a puzzle box!  The instructions for the set are stored in a hidden compartment within the set that must be solved to gain access to the instructions along with a Cubicdissection sticker.

The Penultimate Burr Box Set’s 27 pieces can be used to make a multitude of 6 piece burrs.  Each piece requires phenomenal accuracy since it is not feasible to test every 6 piece burr that can be made with the set to ensure a good fit.  The set of burr pieces was originally defined in Creative Puzzles of the World by Peter Van Delft and Jack Botermans.  Along with the description, they provided solutions for 69 burrs that can be created.  Unfortunately, Van Delft and Bottermans defined the 6 piece burr as being solid with no internal voids, which left most of the set’s potential untapped. 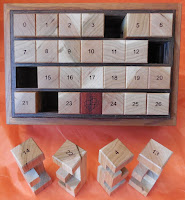 The Penultimate Burr Box Set analysis showed that 708 burrs with internal voids could be constructed with unique solutions, i.e., the 6 pieces can’t be reconfigured for another solution.  This is an additional 173 burrs compared to the 535 supported by the Ultimate Burr Set.  Each solution requires from 1 to 5 moves to remove the first piece as shown in the following table.

After rescuing the analysis paper from its well-hidden secret compartment in the box, I was wondering which of the 708 puzzles I should start with.  Having rapidly worked through other sets in the past I was feeling cocky and thought that maybe I should just jump to the 4 and 5 move puzzles and initially thought that I wouldn’t bother with the 1 move puzzles at all.  In the end, I decided on picking a 1 move puzzle to get things going.

After selecting a 1 move puzzle, I took the 6 pieces and quickly determined that burrs with arbitrary holes are more difficult to solve than ones that only have meaningful holes supporting specific movements.  This has been proven before when Bill Cutler and Brian Young took a perfectly difficult 6 piece burr, Computer’s Choice Unique-10, and removed another cube to make it even harder as Mega Six. 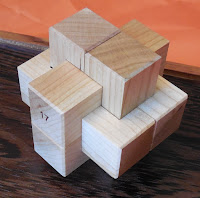 At one point, I panicked and thought that maybe the pieces of the set didn’t match the pieces in the analysis.  I assuaged my fears by pulling out my copy of Creative Puzzles of the World and verifying that the pieces did indeed match.

Instead of simply putting it together, I had to resort to thinking.  This is usually the last resort in puzzle solving but sometimes comes in handy.  Now armed with a process for solving the 1 move puzzles, I made quick work of that first puzzle.  For the puzzle that I selected, the first move separated the puzzle into 2 sets of 3 pieces.  I suspect that this process will stand up well for the other 255 1 move puzzles but will need to be updated for the puzzles requiring multiple moves to remove the first piece.

For those not daunted by building all 708 unique burrs, there are another 20,322 6 piece burr combinations that have multiple solutions.  The analysis identifies combinations of pieces for an additional 190 non-unique burrs requiring at least 4 moves to remove the first piece.