This Puzzle’s No Turkey - It’s Chicken 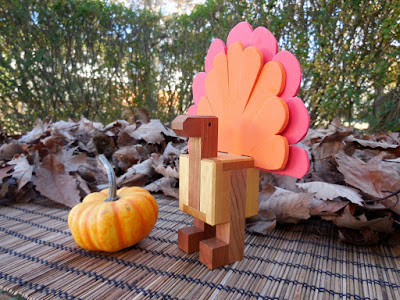 Sometimes when you’re looking for a brilliant puzzle, you end up with a Turkey.  The Chicken puzzle by Olexandre Kapkan, however, is no turkey.  It was made by Eric Fuller at Cubicdissection in 2015 and released in April, which I guess makes it a spring chicken. 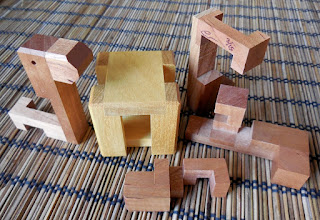 Chicken is comprised of 2 legs, a neck, a tail, and the breast.  It also has 2 holes drilled for the eyes and Eric also stuck the drill bit up somewhere else that we’ll discuss later.  It’s obvious that special care went into selecting the woods to represent white meat and dark meat.  The white meat was made from Yellowheart and the dark meat was made from Cherry.  Eric also took extra measures in the joinery of the pieces to make very strong bonds.

Chicken is a level 10.2 puzzle with the objective to dismember it and then stuff everything back in.  The puzzle is not difficult but the movements required to get all the pieces intertwined within the body are interesting.  After a couple of moves you can start to see inside the body and work out how the pieces need to be manipulated.  Basically, after you move the tail you can get a good look up the chicken’s … uh, you get the point.  A lot of fun for a relaxing sitting.

Word went out late that the chicken was primed to dump a heap of trouble upon the recipients.  It looks like a normal puzzle butt it was designed so that when you pull the tail, you got an extra little surprise that falls out.  In my case, the “extra bonus” probably went in the trash with the packing peanuts since this was in the pre-orange box/sack days when puzzles were swimming au natural in Styrofoam peanuts when they arrived.  However, just the thought of Eric hunched over shaping individual artisanal turds still elicits a smile. 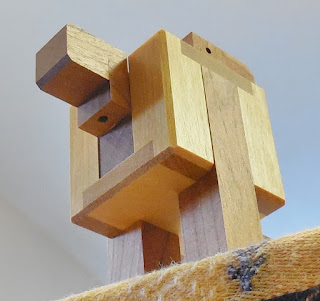 Making burr puzzles in the shapes of animals was obviously a hit with Eric since he hasn’t made one since.  Perhaps too many customers cried fowl.  For craftsman level puzzles, animal shapes seem to be more popular with puzzle boxes and sequential discovery puzzles.  It is also seen more with commercially produced puzzles where the shape is probably more of an enticement than the puzzle aspect.

Happy Thanksgiving and take some time to enjoy a puzzle!
Posted by Zen at 12:00 PM