An Impediment to Rolling Along - Wheel Lock 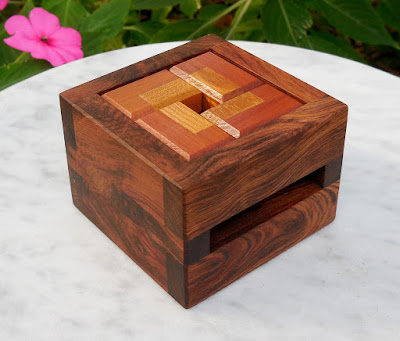 A lot of times, OK, most of the time, I don’t pay a lot of attention to the name of a puzzle while solving it.  It can result in merrily rolling along until it bites you in the lug nuts.  This was one of those times.

Wheel Lock was designed by Tzy Hun Chein and made by Brian Menold at Wood Wonders.  It consists of a frame with 4 pieces and has a level of difficulty of 15.18.14.4.

The grain of the Tamboti frame is gorgeous.  It has a nice weight to it and a lovely smooth finish.  It also has a very interesting bevel on the outside edges.  The bevel on each edge is deepest in the center and becomes shallower as it approaches each end until there is only a little smoothing at the corners where 3 edges intersect.  I’ve never noticed this on a puzzle before and don’t recall Brian making any references to this technique on his site.  I don’t know how it’s done, but the result is fantastic.  My best guess would be to use a sanding mop to get this effect.

The frame has an open slot on 2 of the sides.  Decoration or functionally required?  They are just wide enough for the ends of the pieces to slide into.  I’m assuming that these slots will be used to accept the ends of the 4 pieces as they are moved out of the way of other pieces traveling on the solution path. 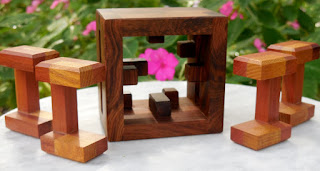 Wheel Lock was one of several puzzles that I bought from Wood Wonders in August 2017.  When they arrived, I immediately took them apart to make a nice selection of disassembled puzzles adorning the back of my china cabinet shelves in the dining room.  As much as I like the random look of puzzle pieces hanging out of boxes, now a couple of years later, I caved in and sacrificed the random disarray of Wheel Lock pieces to the puzzle gods by reassembling them into an orderly packed configuration.

It would have been easy to insert the 4 pieces within the frame if it weren’t for those little cubes that were sticking out from all sides within the frame.  Since all the pieces have the same simple shape, the complexity of this puzzle is in the pattern of those cubes.

When you look at the pieces put together, they can spiral clockwise or counterclockwise.  Of course, if you turn them over, the spiraling gets reversed.  For each possible spiraling direction, each piece can be oriented in one of 4 possible ways unless prohibited by the internal cubes.  If they were all possible, this would lead to 512 different combinations to try. 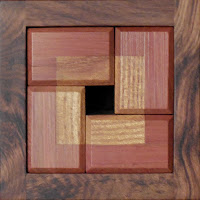 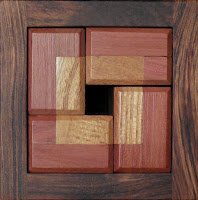 Sometimes you get lucky, sometimes you need to cold start your brain and think about it.  This time I felt that I got lucky.  I started with the spiraling direction that had a corner where the piece could only be inserted 1 way.  Everything just rolled along from there until I had all the pieces back inside in a reasonable amount of time.  It didn’t seem like a 15.18.14.4 effort, but they never do.  Moves get eaten up pretty quickly as pieces are moved within the frame. 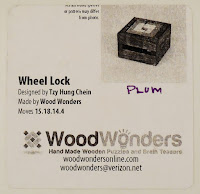 It was then that I looked at the box that it came in.  One nice thing about Wood Wonder puzzles is that the boxes have a sticker on them with information about the puzzle including name, designer, moves required, and a picture of the puzzle.  Brian also sometimes adds the type of wood used to make the puzzle as well.  It was at this point that I realized that the 2 toned pieces in the picture made a nice symmetrical pattern in stark contrast to my avant-garde solution.  Duh!  Does that look like a wheel?  Phooey!  Now I had to update the picture on the box.

Needless to say, I was happy for an excuse to spend some more time with this puzzle, and not having solved it seemed like a good enough excuse.  It turns out that there are 8 solutions if you ignore the color pattern, which contributed to my quick success.  Adhering to the color pattern, there is a unique solution.

To achieve that nice wheel pattern, the 4 pieces are made from 2 contrasting wood types: Plum and Mulberry.  Since the pattern on the ends of the pieces is important, this required additional work to avoid the ends of the connecting pieces from becoming visible.  Brian also took extra care with the joinery to avoid butt joints that would result in weaker pieces.  At first glance, they look the same, but if you pay attention to the coloring, one is indeed different.

At the beginning of Wheel Lock take 2, it was obvious that the pieces could only be oriented with each other in one way.  The only question is whether they went in right side up or upside down (i.e., spiraling clockwise or counterclockwise with respect to the frame orientation).  In either orientation, it is obvious where the unique piece goes.  For the frame orientation that I was using, I decided to try the clockwise piece orientation first, which turned out to be the correct choice.

Adding the pieces to the frame is a process of determining the order that the pieces need to be added and the movements required to get them in place.  To start this process, I looked for the best set of 2 pieces that was the most difficult to put in the frame together.  It took me some time to identify these 2 pieces and determine how to get them in the frame.  Once the interaction of those 2 pieces was understood, adding the third and fourth pieces was an effort, but since there were already 2 pieces in the frame, movement options were greatly limited.  It turns out that the third piece that I added needed to go in last and the last piece that I added needed to go in first.  Although one of the pieces had a tendency to rotate within the frame, the solution only requires rectilinear moves.

In the past, I used to look at burr puzzles that required a color pattern to have a unique solution as flawed designs, a cheat added by designers to solve the problem of multiple solutions.  However, after thinking about it recently, if there is a color pattern, nobody in their right mind (I knew I would find a way to exclude myself) would spend time searching the non-pattern problem space.  I found Wheel Lock to be a superb design and thoroughly enjoyed the solving process - twice.  My only disappointment was the limited use of the slots in the fame. 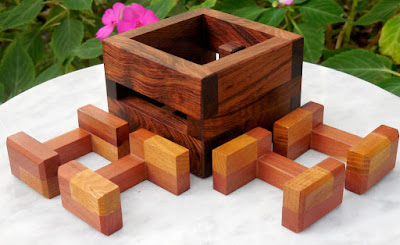