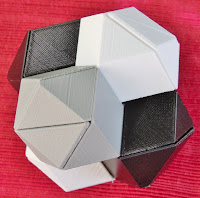 For puzzlers used to working with cubic dissections, it may be a bit daunting to be presented with a puzzle based on rhombic dodecahedrons.  Rhombic what?  To keep it simple, a rhombus is a diamond (all 4 sides of equal length), dodeca means 12, and hedron means a shape bounded by some number of planes.  So, a rhombic dodecahedron is basically a 12-sided object with diamond shaped sides.  The rhombic dodecahedron also has the nice property that if you have a lot of them (at least a cluster), they will pack together with no empty space between them.

Cluster Buster and Truncated Cluster Buster were designed by Stewart Coffin in 1973 and described in his book, Puzzle Craft, 1985.  Both consist of a cluster of 6 rhombic dodecahedrons that has been dissected into 6 identical pieces.  The truncated version has the 6 outer tips cut off to provide a square face on the outward facing side of each rhombic dodecahedron.  The difference between the two is cosmetic and both operate the same way.  The two objectives are to take it apart and to put it back together.  You might be thinking, Duh!, but these challenges are quite a bit different. 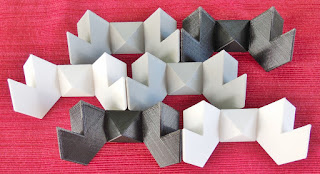 Getting it back together is an entirely different matter.  It isn’t difficult to determine how the pieces should be oriented for reassembly but trying to hold 6 pieces with two hands makes this an interesting dexterity challenge.  In addition, the pieces have to be perfectly aligned to get them reassembled.  A lot of Coffin designs seem to have this theme. 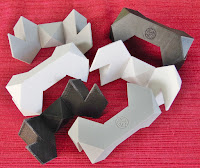 My version of Truncated Cluster Buster is a 3D printed version from Pacific Puzzleworks that was a gift from John Rausch of Puzzle World.  For a 3D printed puzzle, this one is well made.  However, it is quite a bit easier in both the disassembly and assembly compared to a well-made version in wood.  The rounded edges of the pieces provide the ability to get a hold of the edges instead of having to only used the faces when puzzling it apart.  That combined with the frictionless surfaces of the PLA plastic allow the puzzle to be quickly disassembled.  Similarly, the rounded edges make assembly a bit easier since you don’t have to be as exact in aligning the pieces before putting them together.

The 3D printed version is a very nice puzzle, but if you want the full experience, I recommend finding one of high quality made in wood to play with.  However, if you’re planning on buying one, a nice one made in wood is going to cost you a lot more than a 3D printed one.  The one from Pacific Puzzleworks is available on Etsy here.
Posted by Zen at 12:00 PM